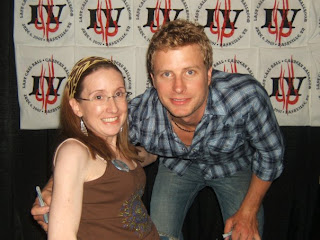 A few months ago, we lost one of our dear friends and fellow DB Congress representatives from Kentucky. Larissa died January 12, 2011 after a tragic accident in her wheelchair.
On behalf of the DB Congress, we sent flowers for the funeral and collected donations for the Spina Bifida Association and BRAWA (Barren River Animal Welfare Association), the animal shelter for Glasgow, KY in Larissa's name.

To say the members of the DBC were generous is an understatement.  They poured out their hearts and we were able to not only send a beautiful, red, white and blue large floral arrangement, but we also raised $100 for EACH charity!

This email is a confirmation that your online entry at the site of Barren River Animal Welfare Assn. was received. The following information was recorded:


Comments: A generous contribution In Memory of Larissa Branham has been made by the Dierks Bentley Congress

"The members of the DB Congress make this donation in memory of Larissa Branham, a dedicated fan of Dierks Bentley and a wonderful friend to so many. She touched us all with her friendship, her smile, and her love of music. Larissa's memory will live in the hearts of all of us." 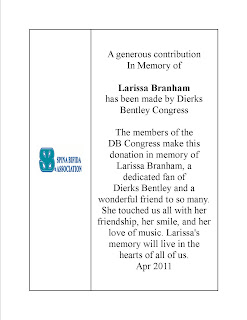