Dierks Bentley to Perform at Play On, Nashville - May 3 at the Opry House 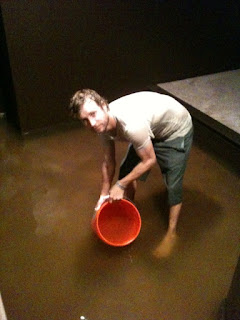 You can’t keep a good show (or city, for that matter,) down. The Grand Ole Opry will mark the first anniversary of the flood that devastated much of Nashville (including Dierks Bentley's basement, photo left) and temporarily displaced the Opry from the Grand Ole Opry House with a star-packed show celebrating Music City’s heart and resilience.

The show, Play On, Nashville!, is set for Tues., May 3 at the Opry House. Among those scheduled to perform are CMA Entertainer of the Year Brad Paisley, Dierks Bentley, Luke Bryan, Charlie Daniels Band, and more.

The Grand Ole Opry House was Nashville’s most famous icon affected by the May 2010 flood. Four feet of water engulfed country music’s most famous stage, and the show temporarily moved to several other Nashville venues throughout the summer before returning to the Opry House following an around-the-clock six-month recovery and restoration.

Nashville charitable organizations including Hands On Nashville, the American Red Cross, and United Way of Metropolitan Nashville will provide promotion codes to their supporters such that $10 from every ticket purchased using the codes will be returned to the charity. Additionally, proceeds from Play On, Nashville! commemorative prints available exclusively at the Opry House that night will go to Hands On Nashville, the volunteer resource center responsible for connecting over 125,000 volunteers to flood-related projects.

“The May 2010 flood devastated homes, businesses, and lives, but it also showcased the unsinkable spirit of our city and its citizens in ways we are still learning about a year later,” said Pete Fisher, Opry vice president and general manager. “We want to celebrate that the Opry’s hometown is stronger than ever the best way we know how— with a one-of-a-kind night of great music.”

“It's hard to believe that it's been a year since the flood,” said Opry member Dierks Bentley. “The city of Nashville, the Opry, and the country music community were so resilient and came together to rebuild so quickly after the devastation. I've never been more proud to be an Opry member, and I'm looking forward to celebrating that sense of community again on Tuesday.”

Purchase tickets online for the historic May 3 show here.
Posted by DB Congress at 11:07 PM