Ridge is Greatest Gainer on the Bluegrass Album Chart 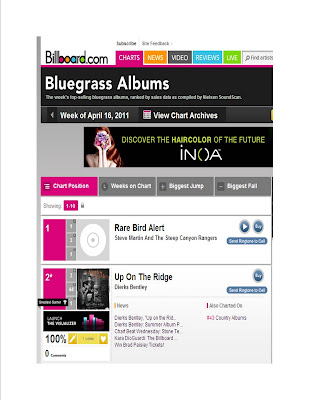 After 44 weeks on the Billboard, Dierks Bentley's Up On The Ridge album grasped the "Greatest Gainer" CD for week ending April 16, 2011.  The project that released June 8, 2010 spent months at #1 on the bluegrass chart, and comes in this week at #2, from #3 last week.  It also charted at #43 on the Country Album charts. Pretty impressive for a collection of songs that country radio didn't see fit to push to the top 20 in either single released (Up On The Ridge nor Draw Me A Map).

Fortunately, the next album is sure to be radio-friendly if the new single, "Am I The Only One?" is any indication.  Already at #37 in it's second week on the Billboard charts, AITOO is sure to shoot to the top of the singles just in time for the album to release in August.  Keep calling radio, congress!
Posted by DB Congress at 5:57 PM

Email ThisBlogThis!Share to TwitterShare to FacebookShare to Pinterest
Labels: Am I The Only One, Billboard chart, bluegrass, Dierks Bentley, Up On The Ridge CD