Dierks Goes Down Under in March 2012 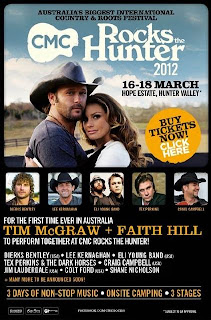 Tickets are already on sale!  This year, for the very first time, CMC Rocks the Hunter is offering a ticket purchase payment plan - 'Time to Pay'.  The weekend concert ticket is $249 and camp site pricing is also available.

Other artists include Australia's own Lee Kernaghan, with whom Dierks duets on his Scars video.

DB Congress reps Stacey and Rachael are especially excited Dierks is coming back to their homeland! "Someone pinch me!  How am I supposed to sleep now?" tweeted Stacey the minute she heard the news.  Stacey and Rachael both met Dierks when he played Australia in 2009.

CMC posted, "Aussie audiences went crazy for DIERKS BENTLEY (USA) when he joined Brooks & Dunn on their sold-out 2009 Australian arena tour. Since he rocketed onto the country landscape in 2003, the chiselled hitmaker has earned a reputation as one of the most electrifying live acts in music today, with a string of chart topping hits and album sales climbing over 5 million in the US. Dierks will be releasing his seventh album, “Diamonds,” later this year."

Australia is in my top ten destinations to do before I die.  Dierks AND Australia? Payment Plan? What do you think, congrass?
Posted by DB Congress at 6:06 PM