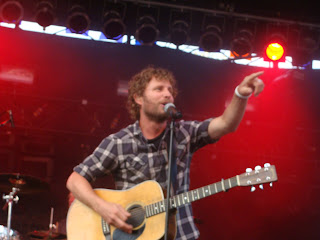 K102's Wake Up Crew (Muss and Donna) followed DB Congress on Twitter and tweeted us the link to their 8-minute interview with our prez-Dierks Bentley.  He talks about the Sugarland stage collapse, Blake and Miranda's wedding and the fact that the new album won't be released until next February--2012!

"I have another single I really want to put out before I release the record...kinda wanna put out two songs that kinda reflect both sides of me and my music...one that's up tempo, fun and just a rowdy party song, and this next one called "Home" speaks a lot about current events and our country and it's a really special song to me, and I want to wait until it has a chance to do well at radio before we put out the album, so it's gonna be February."

Well, Dierks, if we can get "Home" to #1 before February, will you release the album sooner?  We can do it, right, congress?
Posted by DB Congress at 11:02 PM