As most of you know, Team Dude breaks it down in the middle of it's live show and does a "late-night jam session on the bus" featuring bluegrass versions of some familiar songs.  Opinions seem to vary on the segment.  A recent blog on Ben Salmon's Frequency said the following:

My Biggest beef with the show is that bluegrass- a major influence on Bentley (he says) and the basis for his 2010 album "Up on The Ridge"- was given such an obligatory treatment.  Mid-show, the band brought out the upright bass, mandolin, fiddle, and banjo, but rather than rip through two or three or four songs from "Ridge", they aimed straight for the lowest common denominator.  They did the title track (and single) from the record, then used a "late-night jam session on the bus" construct to do a medley of familiar tunes, bluegrass style:  the "Dukes of Hazzard" theme, "All My Exes live in Texas", Billy idol's "Rebel Yell", Bon Jovi's "Wanted Dead or Alive", and then a cover of U2's "Pride (in the Name of Love)" that was on the "Ridge" album.

People seemed to dig it- the "Dukes" theme, Billy Idol, and Bon Jovi tickled their nostalgia bones, no doubt- but it turned me off.  In fact, I thought it bordered on disrespectful to a style that Bentley claims to hold dear to his heart (and I believe him).  Think about it: Rather then showcase their chops and the genre they love by actually playing bluegrass songs, it was as is if the band feared losing the audience by playing bluegrass, so it chose to do its most accessible origin, one serious cover, and a bunch of half-jokey songs before scurrying back to the party country folks came to hear.

That's not honoring bluegrass music.  That's just kind of weak.  And I truly believe Dierks Bentley is better than that.

The blog features a review of the rest of the show in Oregon.  Here's the Link.

For those of you who haven't seen the bluegrass portion of the show (or who want to see it again), here's a video I shot in Westbury, NY.  Keep in mind, I'm not a professional ;-)

So... What do you think?  Thumbs up or thumbs down on the bluegrass??  Discuss. 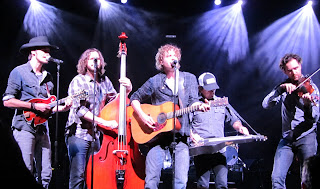