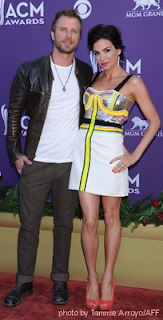 Dierks Bentley's evening at the Academy of Country Music Awards last night started out with a walk on the red carpet with wife, Cassidy and an interview with GACTV's Storme Warren:


One of the first awards of the night was Song of the Year, and DB Congress collectively held our breath hoping to hear our president's name called. And the song of the year goes to....."Crazy Girl," by The Eli Young Band.  Sighs of disappointment from the at-home audience, but Dierks was the first one to jump up out of his chair to genuinely congratulate his tour mates.  It was just a few months ago that DB surprised EYB with a congratulatory cake on stage to celebrate Crazy Girl going to #1--their first ever.

I'm guessing the highlight of the evening for DB was his introduction by his idol, Bono, from the legendary U2.  Bono said this about his '"friend" Dierks,

"Dierks Bentley's music reaches all the way from Nashville to my kitchen in Dublin. When he sings 'Home,' I feel patriotic about America. And I'm not even American. I think anyone who hears it understands that America is not just a geography. It's not just a country. It's an idea. I think country fans get that deeper than most."


The poignant and patriotic performance resulted in a standing ovation! What an inspirational moment.  We are so proud! 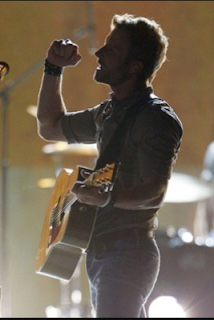 Twitter was buzzing with kudos from fans and industry alike:

Like Little Big Town: @DierksBentley what a great and authentic performance! #ACMs

Tony Thomas: @DierksBentley did such a heartfelt performance of "Home" on the #ACMs. And had an unexpectedly patriotic intro from Bono, completely cool.

GAC: @DierksBentley is gonna be walking around at all the after parties asking the other performers who introduced them on the #ACMs? #Bono

CMT's Cody Alan: I thought @DierksBentley gave the performance of lifetime with 'Home' introduced by Bono at #ACMs -Who was your favorite? #fb


Country Music Is Love named Dierks' performance as one of the top ten moments of the night:

"Keith Urban and Dierks Bentley Pay Homage to America- Labelmates Keith Urban and Dierks Bentley undoubtedly delivered two of the best performances of the night. Urban honored the troops when he sang the self-penned “For You” from the Act of Valor soundtrack and Bentley delivered a heartfelt performance of his patriotic No.1 single “Home.” Both performers received a standing ovation."

When Blake Shelton accepted his Male Vocalist award, he quoted the lyrics from "Home:"
"...I was sitting back there...repeating the lines to Dierks' song [Home], been a long hard ride, got a ways to go...that's still how I still feel, but I'm proud to take this home tonight..."


"w/ friends catching up on last night. humbled and honored by bono's introduction to our performance of HOME. equally so by your tweets."

Later the Eli Young Band tweeted: "Thank you to everyone who believed in Crazy Girl and us! I can't believe we won an ACM! Holy cow!" to which Dierks replied:

@EliYoungBand hell yeah! bring that hardware out everynight on our #countryandcoldcans tour! happy for you dudes.

Even without the win, Dierks was so humble and inspirational.  He's a class act.  That's why we'll always be fans for life--award or not.  As the song says, "I won't lose hope" that someday he'll get the industry recognition he deserves.