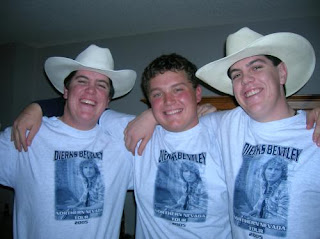 When Austin Glenn (center) was in his second year of college at the University of Nevada, Reno, he started a "Dierks" club with his good buddy Paul. Well, sort of. It was a club organized to get school funding ($50 a semester) to travel to different concerts in the area by renting 15-passenger vans from the school; the funding went toward gas. They called it the “UNR Dierks Bentley & Country Music Club.”They made shirts for all the members of the UNRDBCMC club that were going to the concert, including one for Dierks with his name on the back.

"The great thing about 2005," writes Austin, "was that Dierks was in Northern Nevada 3 different times in the span of like 4 months. So we knew those few concerts as his 'Northern Nevada Tour 2005.' He was in Yerington July 30th; Lovelock on September 15th; and the last show in Reno, NV on December 9th."

The December 9 concert was at the Reno Hilton (now the Grand Sierra Resort).

"I did not become a member of the DB fan club until the 12th of December 2005 so I wasn’t able to sign up for the M&G quite yet. We were in the pit before the concert and some random guy came up to us and asked if we wanted to buy these 2 passes off of him. So of course I bought them and I was pretty excited to say the least." 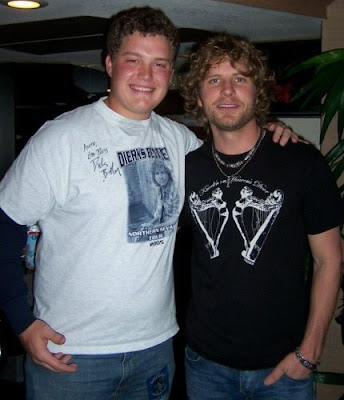 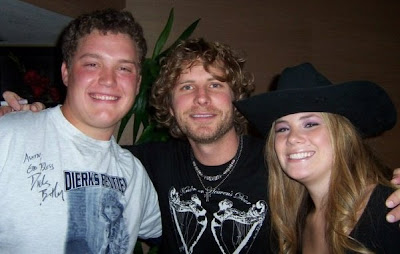 My best friend Emma and I went backstage. We talked with Dierks about his travels a bit, his music, and of course Jake. While we enjoyed his stories we indulged in a few DLCs to make the experience that much better. We took some pictures and he signed some autographs.

Probably the best concert experience that I have ever had.

When I was backstage I gave him the shirt and explained our club’s mission to him, and when he came on stage for the concert he brought the shirt, thanked all of us for the support, and then played a kick ass show. (Back of shirt): 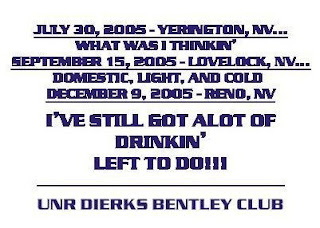 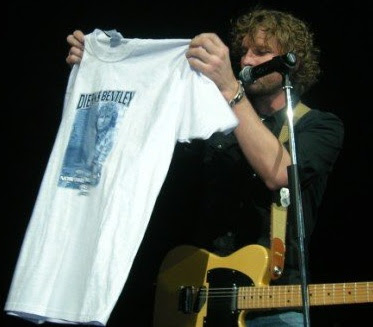 I am now graduated and the club has since been retired, but the experience was like no other."

Austin is a new member of the DB Congress (BuckyBoy73), representing Nevada! Everybody please join me in a warm welcome to him!
Posted by DB Congress at 8:07 PM