BENTLEY'S BLUEGRASS CD MAY BE HIS ONLY ALBUM IN 2010 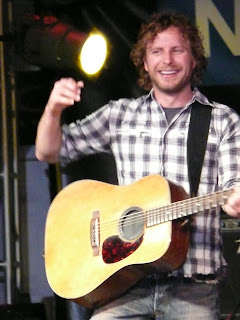 Dierks Bentley has spent the last several weeks in the recording studio working on his first bluegrass project. Dierks had high hopes of cranking out two CDs this year, but he tells us that might not happen after all.

"I started off the year sayin' I'm gonna make two albums -- one straight up bluegrass and the other a country record -- but I've had so much fun makin'this bluegrass record. Of course, it's kind of morphed over this time to be something really unique. It's kind of a bluegrass, acoustic. It's a hybrid, but I'm cutting some songs from local guys here, some songs I've written on my own. (I) cut a Bob Dylan tune. I've got a Buddy Miller song, so it's kind of Americana, it's bluegrass, it's country. I hope my fans will like it."

Dierks says he wanted to shake things up a little bit while paying homage to one of his true musical loves at the same time.

"I've always had strong ties with the bluegrass community and really wanted to always make a record that focused a little bit more heavily on those relationships, and I just really love the record. It was just time to throw a wrench in everything and really switch it up. In the meantime, I'm writing a bunch of stuff for another record, but I'm really having fun with this. This might be the only record I put out this year. I'm just really having fun with it!"

There is no release date yet for Dierks' bluegrass CD.