WILL DIERKS' LUCKY #7 HELP HIM WIN A GRAMMY? 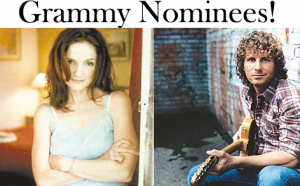 Seven is Dierks Bentley's lucky number. Do you think placing the song "Beautiful World" as the #7 cut on the Feel That Fire album was a coincidence? I think it was probably purposeful. Dierks has said many times how special the song is to him. And the non-single grabbed the attention of The Grammy's to make it his 7th nomination in three years.

Up for Best Country Collaboration With Vocals for the "Beautiful World," duet with Patty Griffin, Dierks tells cjdccountry.com's Margy Hollad that working with Patty was a dream come true, not to mention sharing a Grammy nomination.

"Just looking at my album and seeing her name on the back of the album, that we did a song together, is really special to me, so just to hear that our name will be called out as a nomination, especially for a song that wasn't even a single. All the other songs that we're goin'up against -- well, most of 'em -- were singles. It's just an album cut, but it's a powerful song and I'll save whatever nomination card I get. Whether we win or not, I'll save that as some sort of plaque somewhere cause it means just as much to me as winning would be."

Dierks shares his thoughts on the whole Grammy experience:

"This is my third time going to the Grammys, I think, and I enjoy it every time more and more cause I really do enjoy the whole circus that it is and enjoy being part of it and appreciate it more every time cause you never know when it's gonna be your last time, so I enjoy lookin'around at everything that there is. On the country scene, we're a pretty tight-knit community and you know everybody. It's a different kind of deal. This is more like a spectacle, with all the rock and pop and craziness. I love soakin' it in and all the parties and all the free beer and food. I love it!"

Watch the 52nd Anual Grammy Awards Sunday, January 31st on CBS beginning at 8 p.m. Eastern. Be sure to cross your fingers, rub your rabbit's foot, pick a four leaf clover...whatever lucky charm you have and remember, sometimes the best we can do is just to whisper a prayer!

Dierks and Patty deserve to bring home the Grammy!
Posted by DB Congress at 9:22 PM