DIERKS AND STRINGDUSTERS DO BLUEGRASS WITH CLASS 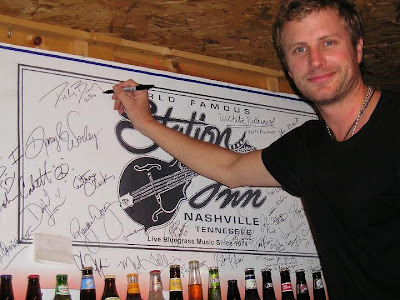 (Photo credit: TheStationInn.com Gallery)
Dierks Bentley went for a stroll down memory lane when he droppped by his old stomping ground, The Station Inn last night in Nashville, Tennessee, and performed with the Infamous Stringdusters. The bluegrass band was the headliner, but Dierks held his own. I think he's doing research for his upcoming stand-alone bluegrass album of his own!

Thanks to Pierce Greenberg, a contributing writer to the9513, for keeping DB Congress updated via Twitter and sharing his story and video of his live and in person experience last night: Dierks Bentley Drops In On The Infamous Stringdusters At Nashville’s Station Inn. Here's an excerpt:

"When it was Bentley’s turn to take the mic, he did so with humility and graciousness. His own “Lotta Leavin’ Left To Do” and “Free and Easy Down The Road I Go,” got the Stringdusters’ treatment, but the real highlights came when Bentley shed his radio-friendly skin. Jon Randall joined the stage for a killer version of the Dylan via Tim O’Brien classic “Señor.”

Bentley’s admiration for bluegrass really showed on the standard, “Roving Gambler”—he didn’t miss one beat. As a preview of things to come, everyone meshed on “17 Cents”—a song that Bentley recorded with the band for their upcoming album, Things That Fly (April 20th)."

As you will see from the video from The Station Inn last night, Dierks finally had enough of the scruff! YEAH!

Dierks posted this pic on Twitter as a hint that he had lost the burly-man syndrome! 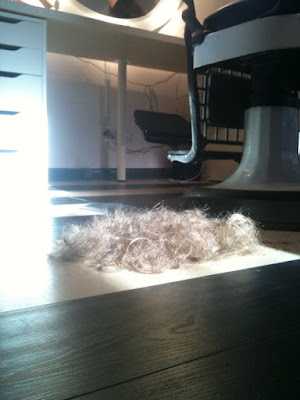