DIERKS AND PATTY'S BEAUTIFUL WORLD, GRAMMY NOD, BUT NO WIN

Dierks Bentley and Patty Griffin were nominated for a Grammy for Best Country Collaboration With Vocals for their awesome harmonies in Beautiful World. But the competition was tough. 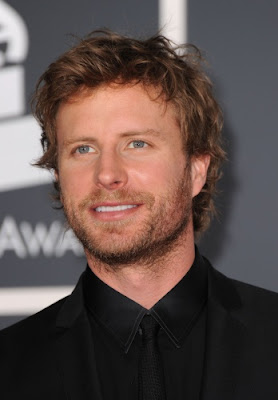 The category was part of the pre-telecast show on Grammy.com instead of in the primetime evening televised show. About an hour before the nominees were read, Dierks posted on FaceBook/Twitter:

That caused a flood of fans replying with their good luck wishes, but all to no avail.

The award was to recognize the best collaborative performance, with vocals, by artists who do not normally perform together. Singles or Tracks only.

The Grammy Winner was Carrie Underwood & Randy Travis for I Told You So. And they were not even there to accepte the award! And, I believe the recorded version was not so much a "collaboration" as a studio stunt, dubbing their two voices together.

The other nominees included Down The Road (Kenny Chesney & Mac McAnally), Start A Band (Brad Paisley & Keith Urban), and Everything But Quits (Lee Ann Womack & George Strait). Some heavy hitters against Dierks' everday struggle to be recognized with the cream of the crop group.

Although I am very disappointed, I am very proud of our DB Congress president. This song will stand the test of time and become a classic! I know we'll press on because there's so much to live for and so much to love in this beautiful world! Say what you will, but I still believe it's a beautiful world and Dierks will be nominated for many for Grammys for years to come! And I know he will win, eventually!