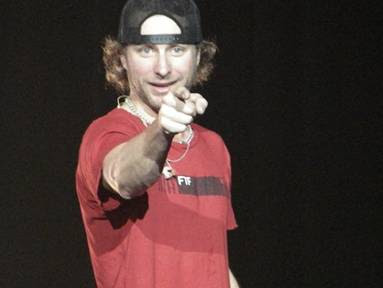 When asked, DB Congress reps felt a Grammy nomination for Dierks Bentley's Beautiful World was the most note-worthy accomplishment of the country music artist's year of great achievements in 2009, with a 43% voting result. And that's just a nomination--he hasn't even won yet! Watch the Grammy Awards on CBS, January 31, 2010 · 8PM ET/PT.

Even though U.S. President Barack Obama quoted Dierks in a speech ("Dierks Bentley said country music is the best shrink $15 can buy"), and Forbes named him 1 of 10 of the next breakout stars, fans still feel passionately that a Grammy would speak volumes about Bentley's basically under-recognized talent.

Not even awards such as an ASCAP Award for Most Performed Songs, CMT's International Artist Achievement Award and a CMT Music Award for the "Country Boy" video garnered enough votes to trump the Grammy nod.

Three solo magazine covers in 2009 - Country Weekly (2) and an American Songwriter cover were not the highest vote-getters, either. The next highest percentage of votes went to the kids: Miles & Music For Kids (Dierks' motorcycle ride/concert benefiting Children's Miracle Network) expanded to 6 cities, with 17% of the vote, followed by Feel That Fire & Sideways - two number one singles in one year, obtaining 10%.

Dierks had a tremendous 2009 and I look forward to even more accomplishments in 2010 as he continues to grow in name-recognition, and talent. With two new albums planned (the first is a bluegrass CD), he is sure to surpass last year's feats.
Who knows? I am hoping this is the year he is nominated for Male Vocalist for both the ACM's and the CMA Awards!