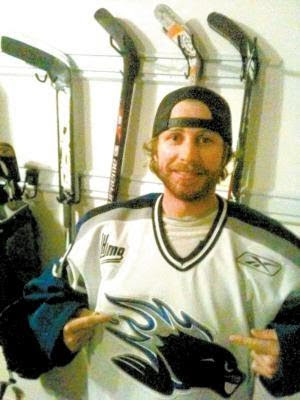 What's this? Dierks Bentley sporting a full beard and mustache? Yes, there's that (not sure I likey that), but this pic is showing off his Sea Dogs hockey jersey that was presented to him in September 2009 before a performance in Saint John.

Bentley was in the city as part of the sold-out show at Harbour Station featuring Brad Paisley and he proudly unveiled it between songs to a roaring-approval of the crowd of 7,000.

Dierks said he was going to hang it on his "Hockey Wall of Honor," located in his garage at his Nashville home.

"I got a huge thrill out of getting the jersey. It's something I don't take lightly, either. I mean, lots of teams give out jerseys to guys coming through town but this is unique. Not everyone has a Sea Dogs jersey."

For those who don't know, Dierks plays for the Nashville Ice Holes when he's not on the road performing.
Posted by DB Congress at 2:11 PM