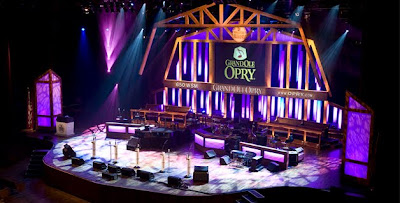 An Opry member since October 1, 2005, Dierks Bentely will perform Friday, February 19 along with Craig Morgan, Diamond Rio, and the Del McCoury Band. The Grand Ole Opry returns to the Grand Ole Opry House in February, after spending most of the winter at the historic Ryman Auditorium.

The Opry is one of my all time favorite places to see DB! Although he typically only gets 2-3 songs, it's well worth it to me! I'll probably listen and chat online with fellow DB fans this time, but I hope to see Dierks live and in person at the Opry some other time in 2010!

Here's a little of the DB's Opry history:

Because Dierks is touring non-stop all year, the Opry decided to take the invitation "on the road" to him. Opry member Marty Stuart briefly interrupted Dierks' performance in Los Angeles at the House of Blues to issue the welcome invitation. Dierks had no idea Stuart or the Opry officials were in the house. Stuart walked onto the stage an hour into Bentley's set and said, "Will you do it...will you marry the Grand Ole Opry? "Hell yeah!," Dierks replied. On Stuart's command the Opry microphone stand was positioned at center stage.

After the invitation, Bentley was left speechless and had a hard time getting through his next song. “This is the greatest night of my life. Thanks you guys for sharing this with me,” he stated to the packed house. “I had no idea what was going on.”

On October 1, 2005, Dierks was officially inducted as a member of the Opry.

From his early days in Nashville as a researcher at TNN, Dierks has had incredible admiration for the Opry and its members. In fact, he was such a fan in those days that the Opry's General Manager Pete Fisher had to go as far as limiting his backstage access making Dierks’ induction this week as the youngest member of the Opry a true benchmark in his career. “It’s like having a home off the road and a place you can always go to play music in town,” Dierks says about his new status as ‘Opry member.’ “The Opry is such a huge part of American history. It’s bigger than just country music. It’s a big reflection of our country.”

“Hopefully I can be a really great asset to the Opry, and I’m looking forward to proving that over years to come.”
Posted by DB Congress at 12:20 AM