Lhillhouse joined the Dierks Bentley Fan Club a little over a year ago, and quickly jumped on the DB Congress bandwagon to help promote and support D in Oklahoma. Although she's been to five DB concerts, she never met the country music multi-talent--until last night. Lori's first Meet and Greet in her home state was meaningful for her.

"Since I grew up in Yukon, OK (where Cross Canadian Ragweed is from), I asked him when he was going to have another concert in Oklahoma with Ragweed. He said he wasn't sure, but he sure does miss them and hasn't seen them in a while; 'they are a great group of guys!' I thanked him for showing support for them. As a fellow fan that has watched the career of Ragweed grow, it really means a lot for fellow artists to show support of a band you really enjoy listening to. Later in the concert he mentioned Ragweed and made a toast to them and stated that Cody Canada's mom was in the audience." 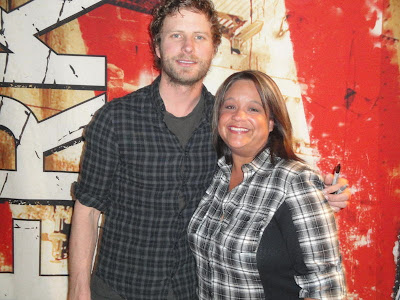 Lori purchased her black-gray plaid shirt especially for the concert (and the M&G) "I know how much he loves his plaid shirts," she admits. Little did she know their shirts would match so closely!

During the group Q&A, Dierks was asked about his recent Twitter pic of the Outhouse. He said that it was really not a functional outhouse and he did have indoor plumming. When asked what he had been working on, he stated that he has worked on 4 or 5 songs, mainly they have a bluegrass vibe to them. He was also asked about the infamous boots. He had his new ones with him, but said he is just not comfortable in them yet, so he was sticking with the old, taped up boots for now.

I asked Lori the most memorable concert moment and here's what she had to say: "Other than getting to meet Dierks for the first time, the concert highlight, as sad as it was, he had a girl come on stage that had a white tank top on. When she was getting off the stage, he convinced her to do a stage dive. Unfortunately no one caught her and she totally went head over heals and hit the floor. Dierks couldn't stop laughing and barely made it through the song (What Was I Thinkin'). Later on his post on Facebook/Twitter he asked if anyone had photos and wanted to make sure the girl was ok."

Even though the incident was both a high and low, the worst part of the whole night was the venue itself. "In the Meet and Greet he told us that they were only letting him play for 65 minutes. So, it was a very short concert. Once the concert started, NO CAMERAS were allowed. If the security guards caught you taking pictures, they would come up to you and try to make you delete your photos."

Ah, the things we go through for Dierks!

As if all three of them planned it this way, Tia showed up for her M&G with Dierks wearing - you guessed it - black-gray plaid! The Oklahoma Sooners fan and DBC rep from Norman, OK had this to say on her Twitter page just minutes after HER firt meeting with Dierks: 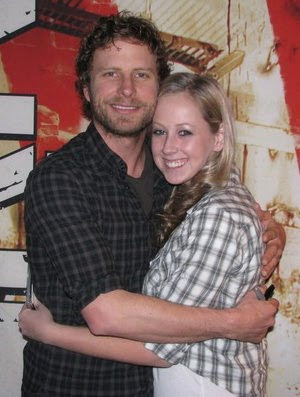 "I luv the way @dierksbentley does his fanclub m&gs!so great 2his fans! @martinamcbride u should do urs that way! So awesome!"

Just met @dierksbentley! Love him! So sweet&sexy! He saw my @martinamcbride tat n loved it. He is so awesome! Excited 4the concert!

Oh and did I mention me and @meghannicole (yet another DBC rep) had front row cuz we rushed the stage for @dierksbentley? Well we did, lol. Love us! Love him!

Me & @dierksbentley [photo above] FINALLY lol. Love this man. I cant say it enough how great he is 2his fans!