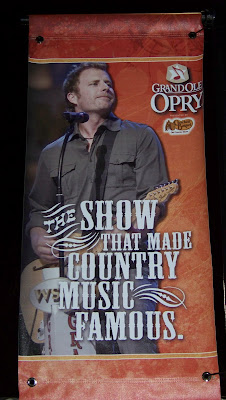 David has seen Dierks Bentley in concert many times, but never at the Opry. In fact, the DBC rep from Kentucky--the same home state at Dierks' steel guitarist, Tim Sergent--had never been to the Opry--ever! So when he learned Dierks would be performing the Grand Ole Opry February 19, he couldn't pass it up! Read his review below!

Well, my first trip to the Grande Ole Opry was a memorable one. History and tradition just surround that place and I was getting excited just walking up to it. Especially after I spotted a cool banner of Dierks hanging on a light pole in front of the place! After getting my ticket, I headed on down to my 4th row seat. That's when I noticed that the seats are like church pews but with cushions on them....too comfy! As I sat down I just stared at the stage for the next 15 minutes taking in the surreal moments of all this tradition. It was awesome!

In the first segment there were some really good acts. Diamond Rio, The Del McCoury Band, John Conlee, and Craig Morgan heated up the stage! After intermission Bill Anderson took the stage and I really liked him. 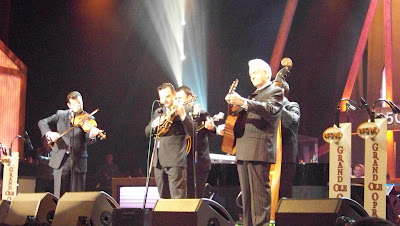 Next, when Montgomery Gentry took the stage they got the crowd going. "Back When I Knew It All" was great live and I can't wait to see one of their full shows! In early December, Eddie Montgomery opened a steakhouse in Harrodsburg, KY [near David's hometown], and I ate there about 3 weeks ago. The food was great and the atmosphere is really cool. You can check it out here. 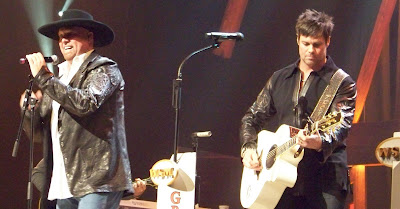 After they left the stage is when all the ladies started to take a seat in front of the stage. There must have been 125 of them waiting to see Dierks from the front row, all with cameras in hand! I thought that was cool. They set up the stage a little different for this show. Tim came out to set up his steel pedal guitar and he set it up right behind where Robbie usually plays from. That was just fine with me being that I was on that side, too. I shouted his name and he acknowledged me with a point and a "Hey David." Us Kentucky boys stick together. LOL

Dierks hit the stage busting into Sideways as that got the Opry crowd going. Dierks knew I was there when it came to the "what....what" part of the song. He gave me a point and a chuckle when he heard me say that. Next, he introduced his current single and played, "I Wanna Make You Close Your Eyes." He sounded great as his voice was right on. But I will have to say this--that was the first time I stayed in my seat while listening to Sideways live. I wanted to get up and cheer soooo bad! 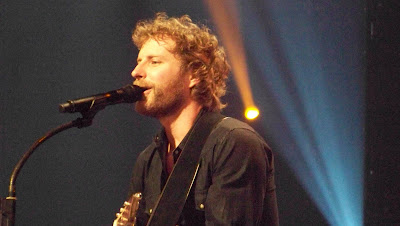 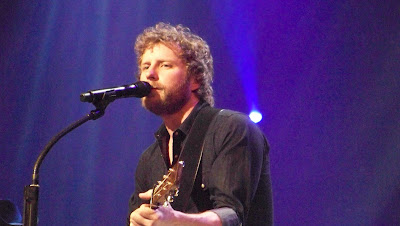 The whole Opry experience was incredible and I highly recommend to anyone who has never been! So much history and tradition.....I'll be back, that's for sure!

After the Opry show I made the trek over to the "Station Inn." Another place I had never been to, and I wanted to check it out. I walked in the door and holy cow, it was The Del McCoury Band on the stage! Del himself was at home, but his two son's and the other band members were there. I stayed to the very end as these guys are awesome to watch perform. You talk about some talented musicians, these guys are nothing but pure talent! Watching Ronnie play the mandolin is just awesome.

I talked to Ronnie for about 15 minutes after the show. I told him that I was at the GAC taping of FTF [Feel That Fire] when he played the mandolin for the song "Last Call." Also told him that I have tickets for this coming weekend when they play in Louisville. He told me "I'll see you there." He also told me something about Dierks' bluegrass album that I need to keep under my breath. But I will just say that the Bluegrass album will be awesome. I can't wait for it to come out!