DIERKS IN ORLANDO FOR MARDI GRAS 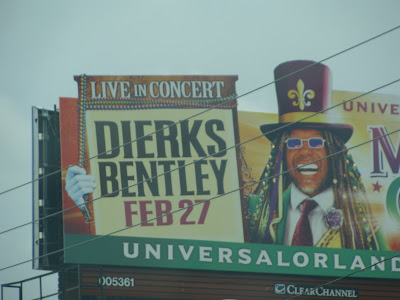 I've been all over America to see Dierks Bentley as he lives his dreams on stage, belting out his self-written hits and winning over casual fans to die-hard dedicated-for-life fan clubbers. Last night, I simply drove 1.5 hours up the road to see a little of America all in one spot. Orlando, New Orleans, San Francisco, Hollywood, New York, and the sounds of Nashville all in 8 hours!

Universal Orlando Resort has hosted Mardi Gras at Universal Studios for 15 years, bringing the New Orleans parade to life and bigger than life artists like Bentley to perform on their Music Plaza stage, in the space that formerly was occupied by the Boneyard--a place for old movie memorabilia relics. Hovering over head is Universal's newest wild roller coaster ride - Hollywood Rip Ride Rockit. Stage right is the Twister attraction.

We arrived around 2:30 pm and stopped at the Guest Services "box office" before going into the park to pick up my Meet & Greet pass before 5 pm, but they told me to go over by Twister. Nobody over there knew anything. Frustrated and hungry, we decided we had plenty of time to find out about the pass, and decided to go eat a late lunch/early dinner.

Now back to our mission. Finally a nice park employee pointed us in the right direction to get my M&G pass at Guest Relations. The line was starting to form to to stage area for the 8:30 show, so hubby stayed there to hold our place. Back with my pass, hubby had handed out lots of DB Congress business cards and was being quite the Dierks promoter to everyone in line.

Met some old and new DB Congress reps who also needed direction to get their M&G passes. It was Susan's first M&G! Great to see Ann, Emily, Belinda, Jennifer, Annette, and Cora again! They opened the gate at 5 pm, and we hustled to the front and slightly off center, in front of Robbie, and more importantly the stairs coming down from the stage! We stood there chatting with the other early birds in the not more than 47 degree Florida air until a little before 7 and then booked it to the bathrooms where we were to meet Chris for the M&G. 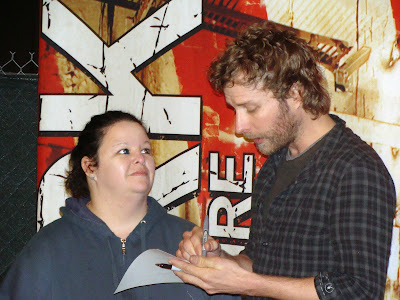 Red badges follow me! Chris lead us backstage (back lot) to what we were hoping to be someplace warm indoors. Not! It was a covered area but still outdoors. The familiar DB Feel That Fire backdrop was there and we all lined up. Jolene (I think) was first and gave him a beautiful jacket. I wasn't close enough to hear the story, but he tried it on. 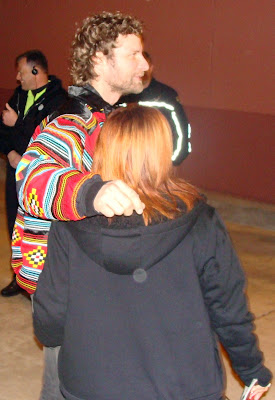 When it was my turn before we even took the pic, he started telling me he had read the Daytona blog on dbcongress.com and how much he loved the site and was so impressed at how professional it looked, and wanted to know who does all that for me. I do! Really? Yep. [Well, my brother designed the layout, but I do all the blogs with a little help from Stephanie, Amanda and Carrie. And Steph helps with some of the graphic design. But it's basically 90% me].

Chris took the pic, then I asked Dierks to sign the pic of me, him and hubby from Daytona 2 weeks ago. If you remember from the Daytona blog, he said on stage that night that "someday they'll have our 8 x 10 up there on the wall boys," so I gave him two 8 x 10's of him and the guys--one to keep and one to send to The Ocean Deck to put on the wall! 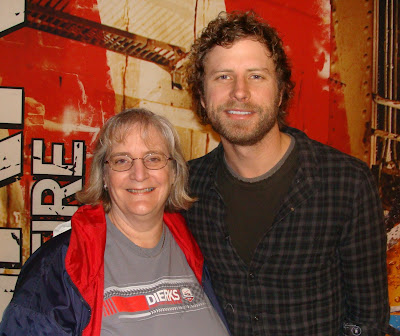 We took a group pic and had a few minutes for Q&A. I asked about MM4K in Atlanta date and he asked Chris--they think it's in May sometime. I must have shown disappointment on my face, and I think he thought I thought the date was too far away and he said, "Hey I can only do so much" or something like that, but that's not why I made a sad face. We're going to Alaska in May and I don't want to miss Miles and Music! 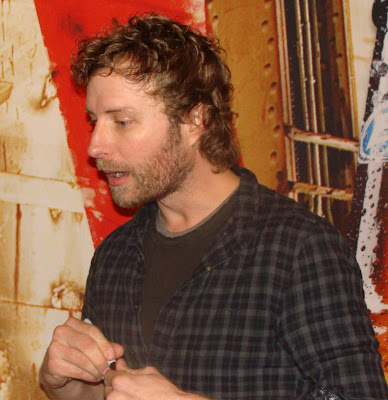 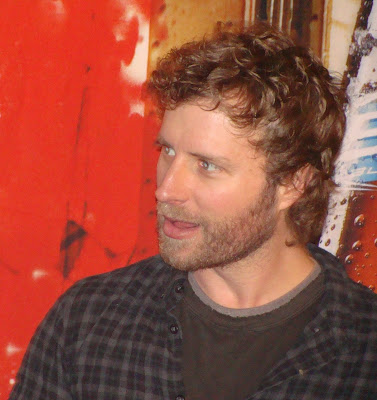 Someone asked how his daugther was and if she was going through terrible two's yet. He said "No, she's great, she's a lot of fun!" Every 60 seconds, the Rip Ride Rockit roared above us, and he made mention every time. "I've been hearing that all day!" Of course it didn't help he had had no sleep, doing a show in Vegas the night before and flying straight to Orlando. He said he had been trying to sleep all day in his bunk with no luck. Said he felt like a vampire trying to sleep in the daytime. 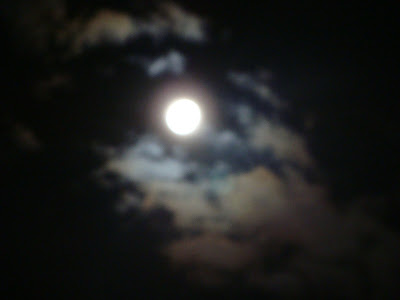 We asked about the upcoming album and I told him we needed a new single to promote. He said they were having a meeting Monday to discuss what song it will be from the new album and that it's really "rootsy, different, but a definite rootsy vibe" he thought we would like. Hope to have it to radio in March. All too soon it was time to go...he still had 70 radio winners to meet.

When we left our front row spaces the grass area was not too crowded, but now everyone had stood up and started packing in close. But we managed to squeeze back to the front. I showed the signed pic to hubby who had been holding our place, and realized D has written "I love dbcongress.com!" above his signature. Made my night!

The Mardi Gras music started promptly at 8 pm signalling the start of the parade. We were not about to leave to go watch it and give up our spots. I couldn't see all the crowd behind me, but right before Settle For A Slowdown, Dierks came front and center, just gazed out into the audience, shook his head and said, I can't believe this. "When I got to Florida this morning I couldn't believe how cold and rainy it was. We didn't think anybody would come tonight. I'm from Phoenix and this is cold for me! But to see all of you here to see us?" He was visibly overwhelmed and grateful.

Prior to the main attraction, Universal was presented an award from the U.S. Military from all branches of our armed forces, in grateful recognition for Universal's complimentary tickets to all active duty men and women and their families. 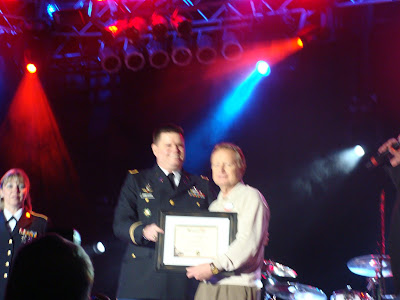 The Mardi Gras girl tried to get us excited that Dierks was up next but she made it seem like it was a few minutes away so everybody started booing. "Don't boo or he might not come out!" she said. 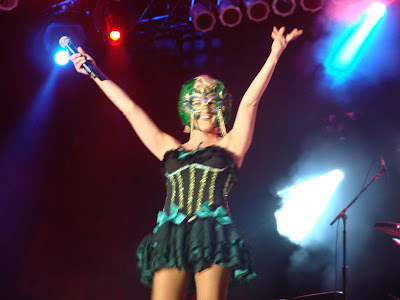 Finally, a video blared from the big screens and we heard Dierks ask, does anybody wanna get sideways? from backstage and the show was on! Robbie came out with a red scarf around his neck. I don't know how they all played their instruments--I had a hard enough time snapping photos my hands were nearly frozen! 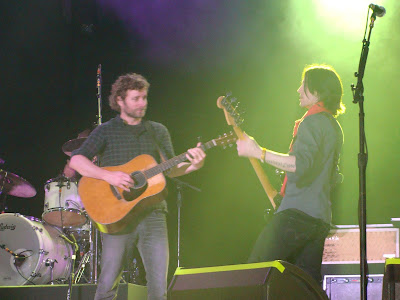 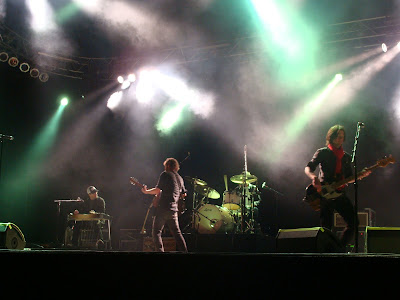 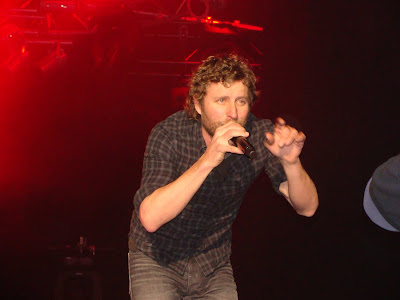 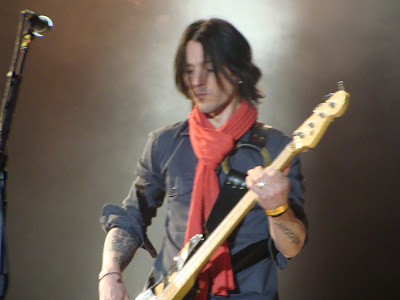 It's good to be near the stairs. Dierks came down off the 9 foot high stage and walked across the front row! During How Am I Doin', he stood up on one of the fence platforms right in front of first-timer Susan! Made her night! 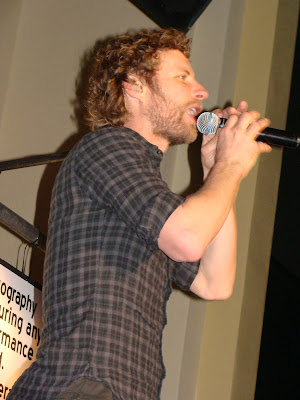 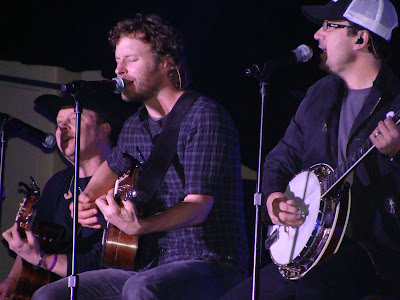 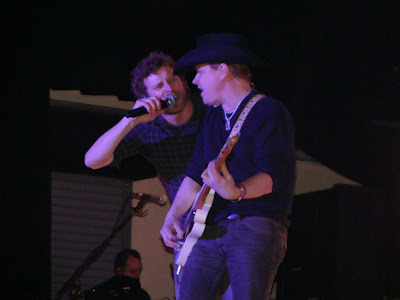 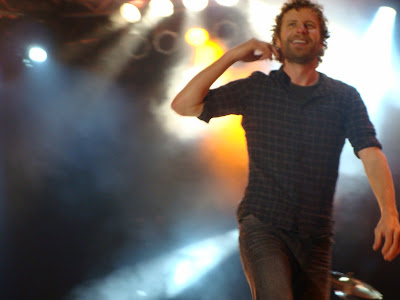 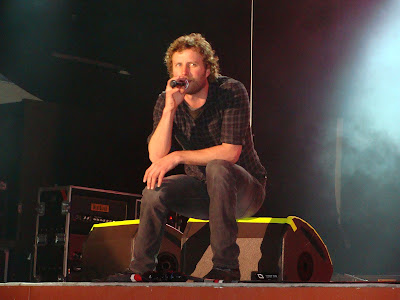 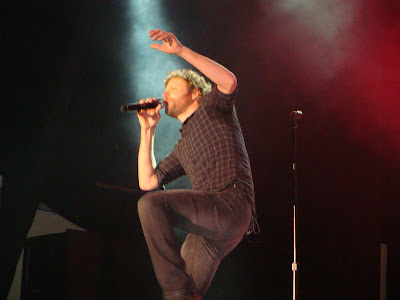 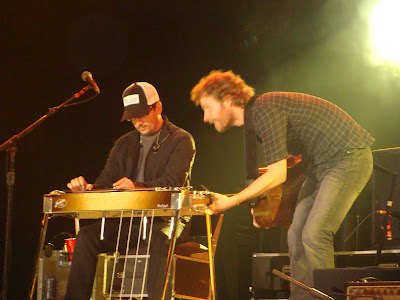 There was a girl doing sign language to Dierks' singing, and instead of picking a girl from the audience he said, "I'm talking to you!" It was funny!

One girl just wanted her hat signed so hubby stretched it out to Dierks and he signed it for her.

As an intro to Come A Little Closer, Dierks started singing this song and we all thought it was new...but it was just a few bars to set up for CALC:

Dierks's voice sounded great despite the sleep deprivation. And he got all the words right except for two songs, but I think only us die-hard Dierks fans realized it--the other 3,000+ probably had no clue--he covered very well. Kept right on going...true professional! Next time though, it's OK to NOT schedule shows back to back that are 3,000 miles apart! We'll understand! Take care of yourself first!

Emily's patience paid off and she snagged the set list at the end despite the security folks yelling "move it people, show's over!" Thanks Jay! 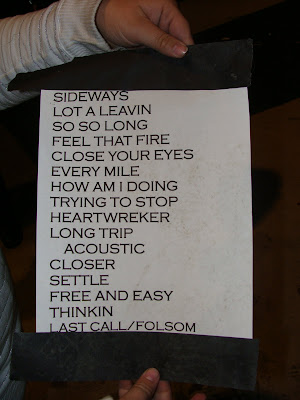 Take a bow, boys! You did Mardi-Gras good! 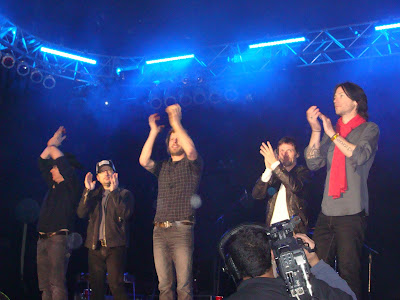 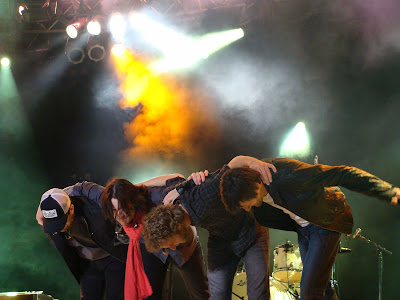