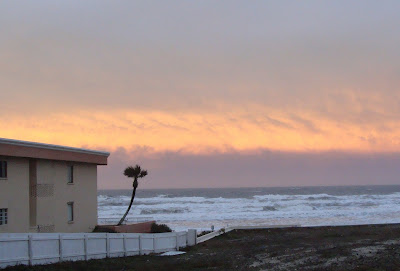 Although Dierks Bentley in Daytona Beach was a free show, it came with a price. Verizon sponsored the event at the V-Lounge--(how appropriate for V-Day weekend), which is normally a "right-on-the-beach" stage behind The Ocean Deck Bar and Grill. But the weather wanted no part of cooperating, and it raised it's ugly gusts up to 40mph, rained relentlessly, and brought with it a chill to the air.

Driving 4 hours from Tampa (normally only 2.5) in the pouring down rain, wrapped up in the warmth of my Dierks Bentley hoodie, and thanking the hubby every hour for doing the driving, all I could hear in my head was DB singing, You Hold Me Together from the Feel That Fire album:

I knew it wasn't likely D would sing my favorite FTF song that night, but the surrounding images screamed these lyrics to me!

We arrived around 3 pm and scoped out the place. We talked to The Ocean Deck and Verizon staffers and everyone was giving us a different version of what the plans were. Food was good, but no tables, so we shared with another couple--Betty and Warren from IL. Big NASCAR fans! The girls from Verizon posed for a pic: 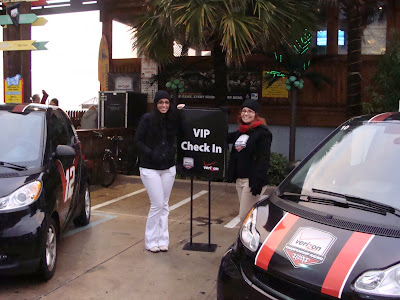 Winning VIP passes and Meet & Greets via the DB Fan Club was supposed to get us special seating by the stage in addition to the M&G. But due to the weather and high tide, the event got moved in doors--and all hopes of VIP seating were dashed! Not that anyone can control Mother Nature. We found out that Dierks actually made the decision to move it indoors for safety reasons.

First in line for the Meet & Greet--that is a first! Usually I'm last, but with 100 behind us, we wanted to try to get in to the VIP area! Can't you just hear Ricky Bobby saying, "If ya ain't first, yer last!" Brittany and Chris told us there was a photographer to take pics and they would print them for us by night's end. Could not use our own camera, and no autographs.

I brought my copy of the 2009 DB Congress yearbook I made and sent to him since I didn't know if he had received the original. He said he had, but would love a second copy and that he really liked it. So I gave it to him along with a letter for him and one for Tim. Took a pic with hubby and me and time to move on. Shortest M&G ever. Just as well, since we wanted to make our way to the VIP area ASAP! 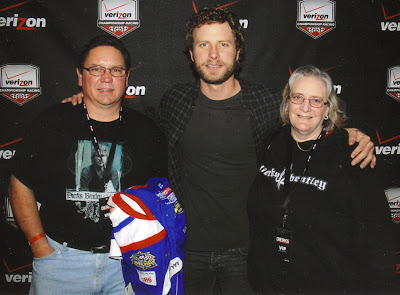 Big mistake on my part thinking we (the DB fan-clubbers) were the "only" VIPs--there were probably 100+ others. And since everyone inside The Ocean Deck had already been there all afternoon, we had to squeeze through a sea of hundreds to get to the make-shift VIP area--which was a pit of sorts.

Normally I love being in the pit for Dierks, but last night was the worst I have ever been in--literally we were all squished in on all four sides. Luckily hubby is taller than me, so he stood behind me and took photos. About 3/4 of the way through the show, the fire marshall came in and offered a choice: Clear the aisles (what aisles?) and go outside to listen to the show via the Verizon tent speakers, or shut down the show. All those who volunteered to go outside got a free drink. Funny thing is, it got WORSE after that up front! What?

While all of that may have been the "price," the show was the reward! Verizon hosted a quick Q&A with the NASCAR Nationwide series drivers #22 Brad Keselowski and birthday boy Justin Allgaier, Verizon's #12, and they both introduced Dierks! 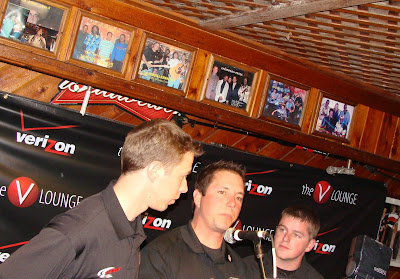 Dierks and the guys kicked it off with hot harmonies on Dixieland Delight! I've never heard them sing this live--what a treat! 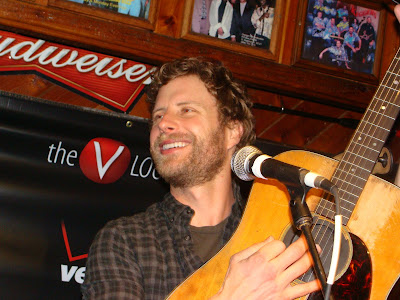 The rest of the set list had the party rockin' just right! A few songs in, and Dierks asked the crowd to shout out requests. Everyone wanted Sideways but he said he had to work up to that one..."I gotta BE sideways to sing Sideways!" 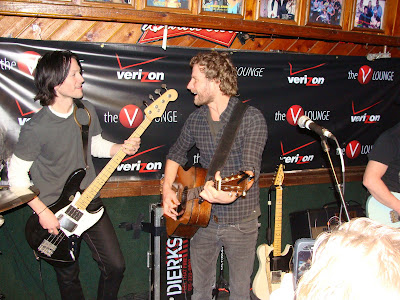 Dierks told us how he loved being back performing in the small bar setting, apologized for having to move it inside but that just got him closer to the bar and asked for a shot of...who knows what. That cup was never empty all night and the Bud Lights flowed freely. 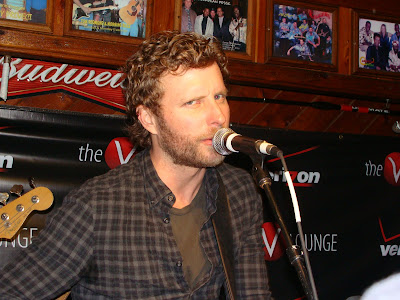 Then (not sure of the order), Life on the Run--D changed up the lyrics and since the stage was so small Robbie had no mic, but was definitely singing his "low low low low" part. In fact, Dierks got playful with a lot of lyrics last night. Like on I Wanna Make You Close Your Eyes ("If you need a little bit of help from "Steve"...Sorry, Steve, I've never seen you in a vest before!"). 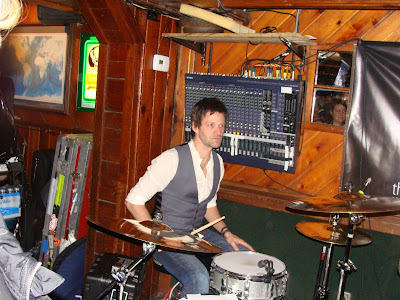 As usual, Every Mile a Memory was customized for the locale ("Florida stars...Daytona night). So So Long and How Am I Doin' were dedicated to all the Ex BFs and GFs. Trying To Stop Your Leaving, Little Heartwrecker, Feel That Fire were all sang straight with lots of that Dierks Bentley moxie-grit emotion! With Free and Easy he interjected, "I keep rollin' like Tim's old banjo," and before Lot of Leavin' Left To Do, Dierks had this to say:

Come A Little Closer and Settle For A Slowdown were the only two slow songs besides 'Eyes, but every word and note was perfection! 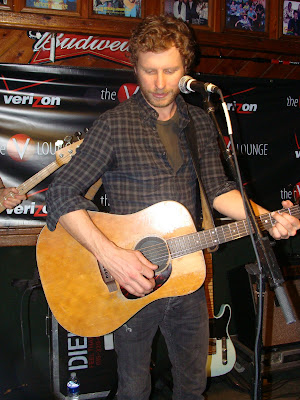 Covers included Hank Jr.'s Family Tradition--where the crowd went wild...but it was not my favorite vocal from him--sorry dude, what melody was that?

On the flip side, he started out "I was drunk the day my mom got out of prison, and I went to pick her up in the rain..." David Allan Coe would've been proud! After that verse though, he stopped and said "That's not the perfect country song cos it doesn't say anything about Little White Tanks Tops! Then launched into What Was I Thinkin'...more fan participation. 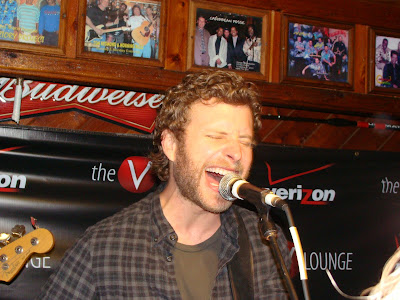 Closing the night with Last Call: "It's not last call but that's the name of this song," Rod rocked it on the electric guitar. But I really wanted to hear the fiddle from the recorded version! Kristi Jo, where were you? 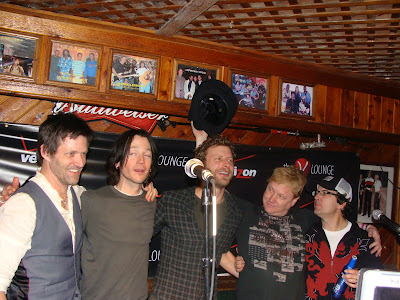 No stage diving/"surfing" and no fans on stage...absolutely no room. All 5 of them had to stay in the same spot all night! Steve only had half drums--not the full set he's used to.

Despite the pushing and shoving and sardine-ness, if I had been front row on the rail, and had elbow and breathing room, it would have been one of the best shows I've ever experienced.

After the singing, Dierks signed a few autographs, hugged Kasey Kahne's mom and left the stage. I tried to get a set list or a pick--no luck. At the last minute Jay called me back; he had found Dierks' Thomas O'Brien, thick, black, 100% cotton,"towel" and gave it to me. If ya ain't first, yer last! 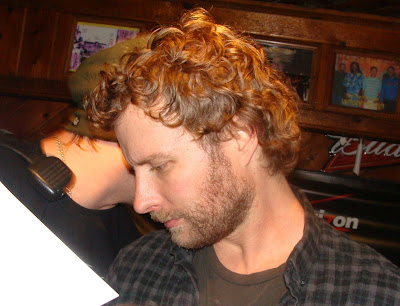 Met Kasey Kahne's mom, Tammy and got a pic. She was so nice! 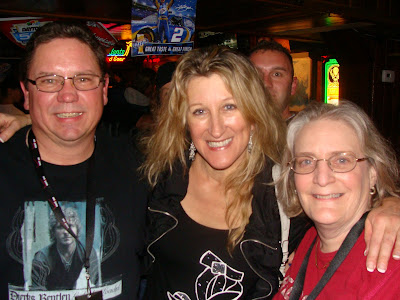 We then made our way back to the Verizon tent to pick up our M&G photos and I had totally forgotten about the autographed poster and a swag bag with a t-shirt and other goodies! What a cool suprise! Thanks, Verizon! 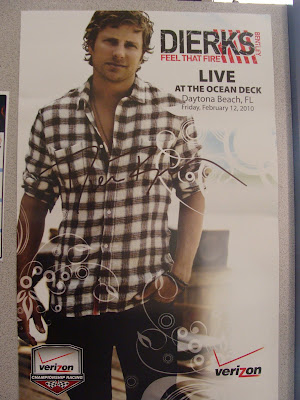 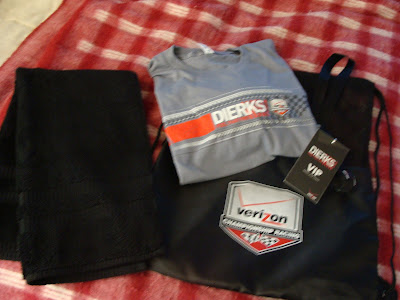 It was great to see/meet some DB Congress reps (Keesha, Ann, Lissa). The drive back to Tampa was a lot faster than the ride to the beach. Dierks is always worth it.