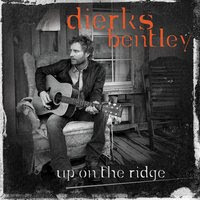 This blog was posted on Dierks Bentley's MySpace and Facebook pages today.

Nashville, TN – December 15, 2010 – As 2010 comes to a close, country music maverick Dierks Bentley capped off a daring year with three GRAMMY nominations for Best Country Album for his critically acclaimed UP ON THE RIDGE and two nominations in the Best Country Collaboration With Vocals for the album’s “Bad Angel” featuring Miranda Lambert and Jamey Johnson and “Pride (In The Name Of Love)” featuring Del McCoury and Punch Brothers.

Since announcing this Spring that his fifth Capitol Nashville studio project would be steeped in the bluegrass and roots music that moved him to become a country musician in the first place, Bentley has garnered the support of fans, media and industry peers alike. UP ON THE RIDGE has been named one of iTunes “Best Albums Of the Year” and one of Amazon’s “Top 10 Country Albums of the Year.” It also earned glowing praise from critics who said the album was “the best country recording we’ll hear in 2010” (Washington Post), “timeless” (NPR) and “shocking in its freshness” (Boston Globe).

Bentley will close out his year UP ON THE RIDGE with a revival of his intimate Dierks Bentley and Friends pre-GRAMMY bash at the Troubador in Los Angeles on Feb. 12. The last edition of this event featured surprise guests including members of Pearl Jam, Paramore’s Hayley Williams, Miranda Lambert, Brad Paisley, Dwight Yoakam and more.
Posted by DB Congress at 8:11 PM