Best Bluegrass of 2010: Dierks Bentley, Up On the Ridge 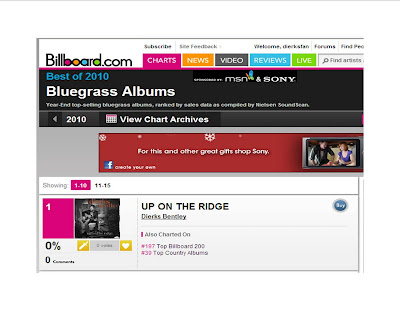 According to the Billboard Bluegrass charts, Dierks Bentley's Up On The Ridge CD held the #1 spot for the year end of 2010!

Popmatters.com listed the album as #10 in their Best of Bluegrass top ten list.

"2010 was a year that saw a variety of progressive bluegrass bands pushing the borders of bluegrass further than ever into genre-defying directions. Purists will continue to argue that bluegrass instrumentation alone does not bluegrass make, but everywhere you looked this year, string-band musicians kicked against (or became bored by) traditionalism’s rigid boundaries and delved into subspecies like jamgrass, jazzgrass, chambergrass, avant-gardegrass, etc. At the same time, mainstream country acts, both young (Dierks Bentley) and old (Joe Diffie), made bluegrass-influenced records in seeming reaction to the pop-metal revolution underway over on country radio. "

#10 Dierks Bentley Up on the Ridge

"Not authentically bluegrass enough, you say? Oh, stop it. Sure, Up on the Ridge has the slick sheen of a major-label Nashville release and incorporates as much country as genuine bluegrass, but give Bentley credit for his about-face return to acoustic music. Plus, there’s still enough barn-burning bluegrass here to put you in the shade. By including a wealth of first-rate material (Dylan, Kristofferson, U2) and by accumulating a busload of the world’s best pickers (Sam Bush, the McCourys, Punch Brothers, Bryan Sutton, Tim O’Brien, Alison Krauss), this thoroughly entertaining album is a bluegrass celebration."
Posted by DB Congress at 9:32 PM

Email ThisBlogThis!Share to TwitterShare to FacebookShare to Pinterest
Labels: Billboard chart, Dierks Bentley, popmatters.com, Up On The Ridge CD