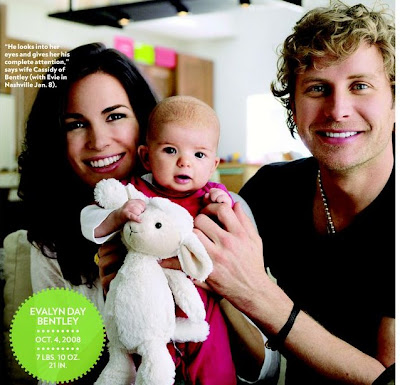 Dierks Bentley and his wife Cassidy, are eagerly awaiting the arrival of their second daughter, who is due any day now. But the country superstar admits that, while they are anxious for their little girl to be born, big sister Evie has an entirely different opinion.

"I have a feeling her world's gonna be rocked here pretty soon," he says (quote via CMT). "She realizes there's somebody else coming over to the house and they're not going away."

The multi-platinum selling singer says that the addition of a new baby right around the holidays is causing him to how he spends Christmas with his own clan. "In the last couple of years, we haven't really done the tree thing because it's just been me and Cas, and we usually have a gig around Christmas, so we come back, and it's all dried up and dead and a big fire hazard," he says.

This year, though, they finally added a tree to their holiday decor. "It's fun to try and remember the traditions you had with your family and try and make them new again," Dierks says.

The country star admits that his entire outlook on life changed after becoming a father, including his devotion to his Miles & Music For Kids charity. "We are fortunate to have a healthy daughter, and we pray that our second child will be healthy as well," he tells The Boot. "These families who have children in the hospital, they need to only have to worry about their child getting well, not where the next money is coming from."

Dierks will spend some time off the road getting acquainted with his new baby and working on a new CD of country hits. He is scheduled to perform in the historic Troubadour night club in Los Angeles on February 12 -- one night before the Grammy Awards, where he has three nominations.