A Retrospective Look at Dierks Bentley's 2010 in Pictures 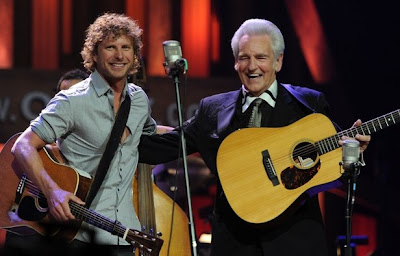 A gallery of Dierks Bentley pictures from tasteofcountry.com serves as visual proof that, this past year, the bluegrass musician has been hugely successful while having a great time. Bentley released his album ‘Up on the Ridge’ in June 2010, and now the album is currently No. 1 on Billboard’s year-end bluegrass charts. This past year also found Bentley collaborating with bluegrass icons like Sam Bush, Ricky Skaggs and Del McCoury. To top off his amazing year in music, Bentley’s personal life is also stupendous, as he and his wife Cassidy Black are expecting their second daughter right around Christmas, 2010. Scroll through our gallery of Dierks Bentley pictures and take a peak at 2010 through the eyes of the bluegrass musician.

Email ThisBlogThis!Share to TwitterShare to FacebookShare to Pinterest
Labels: 2010, Billboard, Del McCoury, Dierks Bentley, tasteofcountry.com, Up On The Ridge