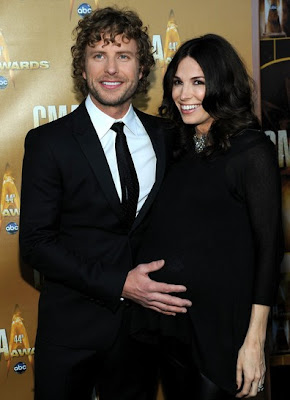 Dierks and Cassidy Bentley celebrated their 5th wedding anniversary on Tuesday, December 14, 2010. They've known each other since middle school and rekindled their relationship February 5, 2005 on a tour bus in Vegas. Ten months later they eloped and got married in Mexico. Dierks even had a stylist friend pick out a Chloe dress for Cassidy as a surprise.

They currently live in Nashville with their two dogs, Jake and George, 2-year-old daughter, Evie, and are expecting another little girl around Christmas.

On Tuesday, Dierks tweeted he was in a writing session that day, so let's hope the couple got some special time together that night! Happy Anniversary Dierks and Cassidy! We love ya!
Posted by DB Congress at 8:43 PM