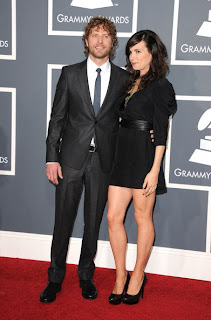 Dierks Bentley discusses his new upcoming album with Doug Pullen from Pulse.  Regarding his current single, "Am I The Only One," Dierks says, "It's a party anthem, appropriate for a tour sponsored by a liqueur consumed by the shot glass. "I'm finding out quickly every night that I am not the only one who wants to have fun."

After the last album, "Up On The Ridge," had a hard time breaking into the top 20 at radio, Dierks' next album, due out in August, will be more commercialized and radio-friendly.

He's thinking of calling it "Diamonds" for his new song "Diamonds Make Babies."

"For me," he said, "it's about girls in general, the years trying to put a diamond on a girl's finger ... and what happens after, like having babies. It's the centerpiece of the album."

The new record is "based on where I am in life" as a musician, husband and father of two daughters, ages 2 and 3 months. "I get on the bus every night with the guys in the band and play video games and guitars and drink beer and go to parties where people yell and I act like an idiot," he said. But Bentley said he was "lucky to marry a girl I had a crush on in the eighth grade (Cassidy Black) and have two beautiful little girls. I really feel like it all works its way into the music."

For Bentley, doing a rockin' tour after a bluegrass-flavored album makes perfect sense.

"I'm kind of yin and yang. I do one thing long enough and I want to do something else, so the amps are cranked up to 11, we're loud and rocking. The show is sponsored by Jager," he said. "But we break it down in the middle of the show, that's why it's great to have "Ridge," because we can break out the acoustic bass and banjos."

Read the whole article here: Dierks Bentley country star headlines show at the Inn of The Mountain Gods By Doug Pullen / For Pulse
Posted by DB Congress at 11:37 AM