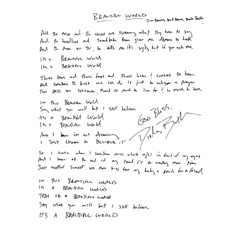 Now through April 15, Dierks Bentley and other artists are participating in an eBay charity auction to aide the Red Cross earthquake and tsunami relief efforts in Japan, supporting victims of the devastation.

Dierks donated handwritten lyrics to his song, ‘Beautiful World,’ from the Feel That Fire album, plus a signed 'Up On The Ridge' CD, a signed photograph, Meet & Greet and concert tickets for four, and a signed football.

If you want to bid on these Dierks items and others, go to the official auction site. EMI has also generously pledged to match every donation up to $1 million Euros.
Posted by DB Congress at 3:32 PM