While many want to meet their favorite artist, it's rare that an artist seeks a Meet and Greet with one of their fans. But Dierks Bentley is one rare celebrity who is doing just that.

Kimberly Munley met Dierks when he performed on July 4th at Ft. Hood. Little did she know HE would be seeking to meet HER four months later. Apparently, Sgt. Kimberly Munley posted her M&G pic with Dierks on her Twitter page and it has been showing up all over the net and television as a result of her heroic act of stopping a gunman at Ft. Hood on November 5. 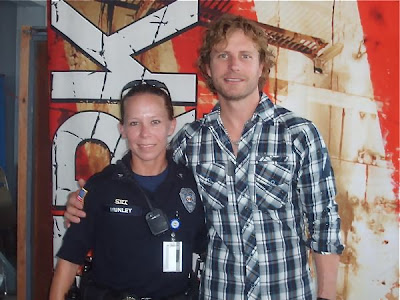 Dierks found out and responded with the following two Twitter 'tweets':

"http://twitpic.com/ohe99 - friend jordan sent me this pic today.we played ft hood 7/4.I want a meet and greet with her now.hero&brave soldie10:20 AM Nov 6th from TwitPic"

"was able to speak to sgt munley & pass along my prayers for a speedy recovering. she's tough! and couldn't be more nice or humble.real hero 12:22 PM Nov 6th from TwitterBerry "

In addition, Dierks did an interview with Charlie Gibson that will air on an upcoming edition of ABC's Nightline.

According to listown.com, Dierks called Kimberly on Friday morning after he learned that she helped fell the gunman and had been wounded in the process.

"I said I was honored to have my picture with her and that my band and I were all thinking of her and praying for the folks on the base. I told her, 'We are all just really thankful to you,' " says Bentley. "She was quiet and she's just humble person and said she was just doing what she does. She would say she's just out there doing her job, but it's a pretty amazing job she did. It's pretty impressive.”

When country star Dierks Bentley met Sgt. Kimberly Munley last July as he played an Independence Day concert at Ft. Hood, the police officer stood out to him.

"She was on the police force and was off to the side but I could tell she was a fan," he told PEOPLE Friday. Munley waited quietly until the crowd thinned out and then approached Bentley for a picture, which she posted as her Twitter profile image. Now, it's the singer who is proud to be pictured with Munley, hailed as a hero after stopping Maj. Nidal Malik Hasan, the alleged the shooter responsible for Thursday's massacre at Ft. Hood Army base, which killed 13 people.

Bentley says Munley was in good spirits despite her injuries and the grave nature of the previous day's events. "I can't imagine what that experience was like but she said she's okay," he says. "She said she lost a lot of blood but it sounded like she's on the road to recovery." He plans to return to Ft. Hood to see Munley again.

On behalf of the DB Congress, all our thoughts and prayers go out to all the families of those who lost their lives during this horrific tragedy. God Bless Kimberly Munley--our prayers are with you as well for a quick recovery!