Last week, we showed you a picture of Mona, DB Congress rep in Iowa, and Director of Promotions (DBC Tshirts), who ventured out on a double DRT (Dierks Road Trip) and ended up with more memories than miles! She shared her story with us below...

The Val Air Ballroom in Des Moines, Iowa is all general admission. So the plan was for me to arrive as early as possible. I arrived at 5:30 am! Nicole arrived around 6:30. We watched the buses arrive before 8am. Kristen and her mom got there about 11, and shortly afterwards others started rolling in. I hadn't seen Kristen in over a year, great to see her again. It was a typical stand in line, take turns for bathroom breaks kind of day. For November it wasn't as cold as it could have been, but we felt the chill!

The venue opened about 6:30 and it was a mad rush to the front. Brandi got our spot dead center, right in front of Dierks' mic. It wasn't long before the beer started spilling. Someone bumped Nicole and when she started to apologize, I laughed it off saying,"well Dierks has started drinking already"--the beer hit the photo of Dierks on my shirt, right in the face! By the time the night was over, my clothes were probably quite drunk!

We were right up against the stage right in front of him! The stage was just slightly higher than my waist and no barricade. You know how Dierks takes someone's beer? He took Nicole's. He was holding it up directly over my head and I felt a drop of moisture hit my face. I was thinking, Dierks spilled beer on me? Then I realized, that's not beer, it was sweat! It was so hot in there! Just a few songs in and all of the guys were sweating! By the night's end, Dierks didn't have a dry spot on his shirt! I watched the sweat roll off of his arm and down his acoustic guitar! Ever notice the sweat stains on it? That's how close I was! 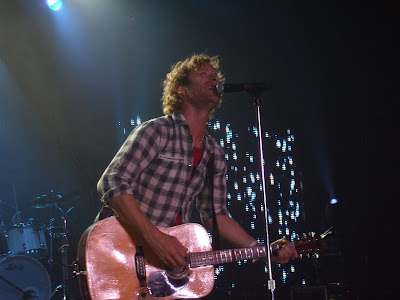 The last beer to spill on me did originate with Dierks. He brought two bottles out looking for the person whose beer he had taken earlier. Nikki, a new Dierks fan, grabbed one of the bottles. At the end of the show she spilled some of it down my back. Let me tell you, the beer in his bottles is so much colder than what's being served in cups! 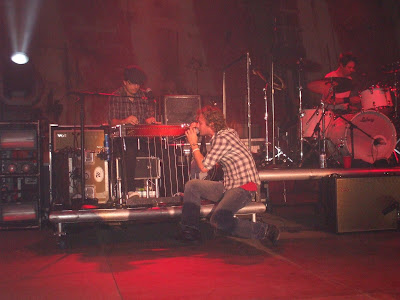 I can't recall the exact set list. He played the hits. He did LONG TRIP ALONE, my fave. He also did Better Believer, so awesome. His acoustic set was different. He talked about his influences, played Hank JR, Alabama, and Waylon.

This pic ended up on Dierks' Twitter page from a different angle. His caption was: "michael jordan could not have made this toss! reminds me of a scene from the movie weird science..more than handful!thx des moines#fb. It reminds me of the song, "That Don't Make It Easy Lovin' Me" (When she threw it on my mic stand I figured they were probably double-Ds): 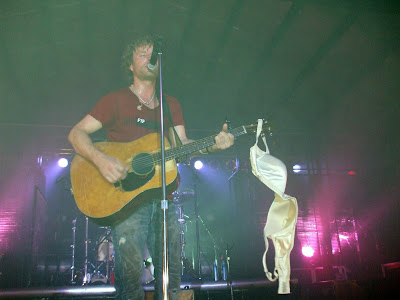 One of my favorite memories of this show is the look on Dierks face. Several times I saw him step off to the side of his mic. And he would continue singing and listen to the audience sing word for word. His smile was so incredibly awesome! You know he was loving this night! The crowd's response was the loudest, the most amazing I have ever witnessed. After the final bow, Dierks walked to the front of the stage to touch hands. The PA system started playing SIDEWAYS. The crowd started singing along, very loudly. The look on Dierks face...PRICELESS! 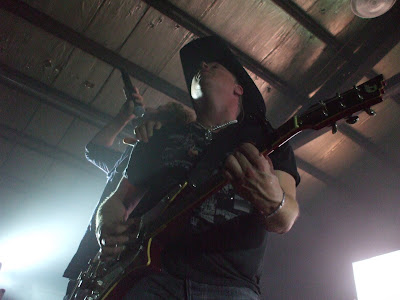 This is the best show I have ever seen.

I got the chance to tell Dierks that the next morning in Waterloo! Brandi was the one responsible for getting our place in line this time. And she did. Nicole and I arrived around 11. Not too long afterwards, Dierks pulled up in his jeep. He opened the door and said something to us about being there so early. HA! We talked to him for several minutes. He seemed a bit surprised when I told him out of seventeen performances, last night was the best! For me it was.

But Waterloo had it's moments...

Doors opened and 6:30 and it was a pushing match. I have never seen so much pushing and shoving quite like this. And I stayed up front! We got about the same place as the night before except there was a catwalk this time. (I don't think I like catwalks.) Those with M&Gs had a very hard time getting back to their spots. Beer runs...nasty! Amazingly, my clothes stayed sober. Samantha L from WI was at this show. She was busy before the opening act playing matchmaker (ok, Sam,the guard was really nice but we aren't going to meet in the middle).

This time was kind of hard to hear when he was just talking, guess it was a little too loud? The music was awesome as usual. Robbie was a little mischievous, I watched him deliberately knock Dierks' mic stand over when Dierks was on the other side of the stage. That mic stand hit the floor a lot! 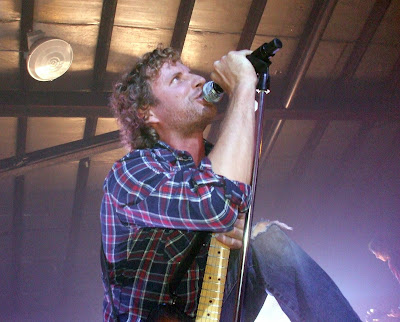 I have two moments from the night...the end when Dierks finished his hand touches and started off of the stage. He stopped and just stood there with this proud yet humble, satisfied yet amazed expression. It was like the audience had given him just a little of what he gives to us. 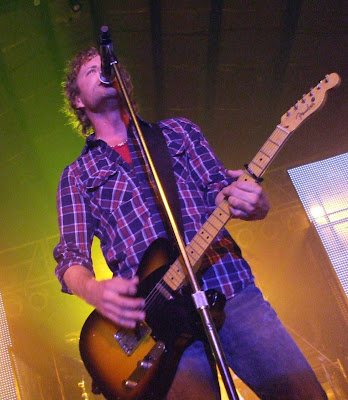 Dierks changed the set list from the night before. He didn't talk before launching into LONG TRIP ALONE. He looked down and a saw me singing along. Eye contact during my fave! The very next song was BETTER BELIEVER. How absolutely wonderful, my all time favorite song followed by my second favorite Dierks song. Hearing them live back to back reminded me why I love those songs so much. They reminded me just how lucky I am.

I have more memories than the miles I have traveled to see Dierks. It's not just the awesome performances, perfect music, meeting Dierks, it's all of you. The laughter, the friendship, the emails. Even when I get frustrated with the shirts, your emails, your stories (Dierks pointing out the shirt in the crowd!) and photos, are priceless memories for me. And this DRT was uhmmmm, 715 miles, and twice as many memories!
Posted by DB Congress at 5:56 PM