A ROSE WHISPERS A PRAYER 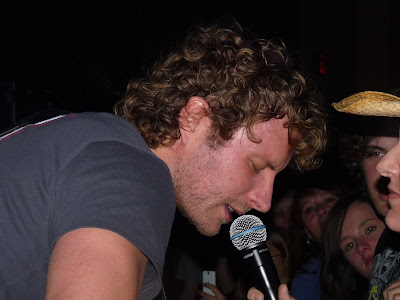 Alicia starts her review out with her Meet and Greet experience. Here We Go!

"So my M&G was Friday night at 7:15. I figured it would be a quick one because there were radio people after us and the show started at 8 pm with no opener. It was so small backstage and we had to just have the M&G in a hallway. It was really rushed, of course this is no fault of Dierks and I’m always grateful for the opportunity to talk with him even if it’s only for 30 seconds.

I brought my picture from the Tinley M&G for him to sign. He looked at it and said “I remember this, it was recently.” I said,”Yeah, it’s from Tinley Park, IL” and he remembered that we (Ronna, Mona, Jenny and I) went to Indy the next night as well. (Great memory, Dierks!) He answered a few quick questions and I asked if he was going to do Better Believer that night and he said yes. I was thrilled! I am NOT posting my M&G pic because I look horrible but here’s a beautiful pic of Dierks during it. 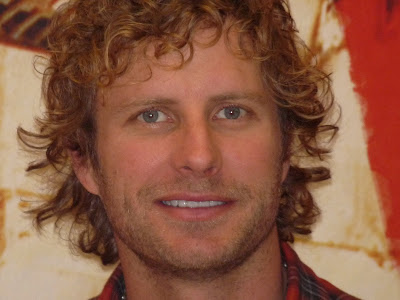 Dierks hit the stage around 8:10. Tracie and I had 4th row seats, but Tracie ditched me (LOL). Just kidding Tracie. Awesome show! It was so great to see a full Dierks set. Lot’s of songs I’ve never had the chance to hear live, like, Wish It Would Break (YAY…finally I hear that live, it’s one of my favs), Little Heartwrecker, Life on the Run, and Better Believer. I made my concert calls…Ronna [*Thank you!], David and Heather! He played about an hour and 40 min.

Tracie and Tina (Tracie’s twin sister) arrived after the show and we all hit the bars! We were just having a great time! Jay and a few of the DB crew were in the bar. Then Rod and Dierks showed up. We didn’t bother Dierks; he was surrounded and he saw us so we figured if he wanted to come over he would. He ended up going to play Blackjack.

We did hang out with Rod for quite awhile. He sat down at our table and we were just chatting and drinking. We all ended up going into the 2nd bar where there was a live band and danced and had a blast. I even danced with Rod when the band ended and Lot a Leavin' Left to Do came on! Totally fun! I wish we had a pic of that but Tracie’s camera battery died and I didn’t have mine downstairs. Then it was last call and time to wind down for the night.

On Saturday, we went down to the box office to get Tina a ticket for the show. She was joking around with the box office lady and said, I’ll take 1st row please. We all started laughing. Then the lady goes “Sure, I have Section B, Row 1, Seat 13, 14, 15.” So here we are staring at this women like she’s from another planet because we cannot believe what we are hearing. So needless to say we jumped all over that! I did feel really bad because there were only 3 seats and four of us and Jenny didn’t end up with one, she had 5th row. Next time Jenny, I swear!

So Jenny and Tracie had their M&G’s and then we all went in for the show. We had front row center! We got the low down from the security guys on which song they were allowing us to go right up to the stage so we were prepared. Dierks came out to Sideways and we were singing and dancing and having a blast. Rod was wearing a Pimp costume! He was the only one dressed up.

We were getting all kinds of love from Dierks! He motioned for Tracie to come up to the stage (I think she was in shock, I had to push her…LOL) during How Am I Doin’ and did a little spin from the stage with her to 'I danced along.' It was awesome! So we get another song I’ve never heard live--Sweet and Wild--and that’s when we get the all clear to hit the stage. We were front and center! We got lots of handholding and life was great!

Then Dierks and Rod bring out the stools and did Wish it Would Break, so we call Erin for her concert call. When the song was over Tracie and I yelled “Dierks!” and he looks down. I say “Say Hi to Erin.” He takes my phone and says “Hi Erin, where are you in the back?” Tracie and I say, “She’s in Florida.” So then he says something about Rod wearing leopard panties and hands me back the phone. Erin will have to blog her reaction because it’s so great!

So they start to play You Hold Me Together acoustically. Dierks was literally singing and looking right into my eyes and I was just smiling and singing back! It was seriously an awesome moment. Little did I know it wouldn’t be the biggest moment of my night.

Dierks decides to sing Beautiful World so he tells a little about the song and he starts to sing. Ummm…totally WRONG words. LOL. He starts laughing and says “I don’t even remember the words,” so he looks down at us and I start to help him out by singing the words to him. So he starts to play and sing again and then all of a sudden stops, hands me the mic and says “You sing it from the beginning.” OMG!!! I’m still getting a stomach ache just thinking about it. I was like “from the beginning?” and literally my mind went totally blank. 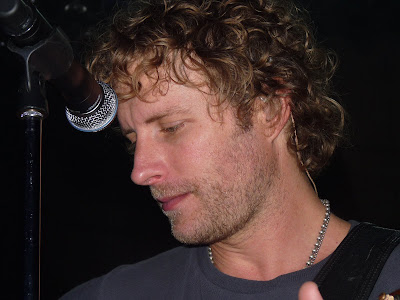 I was in major panic mode! For those of you who know me well I know this is hard for you to believe because A.) I LOVE TO SING, B.) I know every Dierks lyric ever recorded, C.) I am NEVER at a loss for words! Well guess what people? I totally choked! I looked over at Tracie and she says “I don’t know it, sing Row Your Boat.” Now all I can think is Row Row Row Your Boat, Gently Down the Stream. AHHHHHH… so I look to Stage Dive (Stacy) and she gives me this look like don’t even think of giving me that mic and starts shaking her head no (she’s got a great story of her own but I’ll let her tell ya). Finally this like 15 year old goes “I’ll do it” so I handed over the mic. She didn’t really know the words very well but at least she was able to sing something. I can’t believe I blanked!

It was still a totally awesome night and one for the Dierks history books! Maybe someday I’ll get to redeem myself!

P.S. Thanks Ronna for your Facebook comment, it made me feel so much better… 'and sometimes the best we can do is just to whisper a prayer,' that’s exactly how I felt! "