DIERKS TO HELP HOSPITAL WHO HELPED HIM 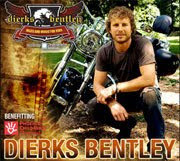 The second of six big events across the U.S. hosted by Dierks Bentley to benefit children's hospitals is less than a week away, taking place in Dierks' hometown of Phoenix, Arizona. The Miles and Music For Kids event begins on Saturday, November 21, 2009 at the Buddy Stubbs Arizona Harley-Davidson with Dierks leading a motorcyle ride and ends with a concert at the Tempe Marketplace. The proceeds will benefit the Phoenix Children's Hospital.

A phone interview with the East Valley Tribune revealed some new Dierks trivia that even his die-hard DB fans may not know about!

Dierks told the East Valley Tribune, "I had a problem with my feet when I was born, and Phoenix Children's [hospital] really helped me and my family out. Once I got to a place in my life where I had some celebrity currency built up and I could do something that would really help these kind of hospitals out, I wanted to do that...the whole idea is to be really down home, really accessible and just have a good time and raise money for a good cause."

"A lifelong motorcycle fan (He drove a $600, 1982 Honda CX500 for years before being able to put money down on the bike of his dreams, a 2002 Harley-Davidson), Bentley will ride a loner from Buddy Stubbs Arizona Harley-Davidson."

Dierks will visit family who still lives in town, staying through Thanksgiving. He'll be visiting the hospital, too. "It's amazing to see these kids and their spirit. You're coming through there to entertain them and give them something to be excited about, but it's the other way around. They're the ones whose spirit really shines. The kids and the staff - they're angels. Just to be able to shake their hands, it means a lot."

Joining Dierks in performing after the ride are Jimmy Wayne, Stoney LaRue, Roger Clyne and the Peacemakers and Jessi Colter.

DB Congress reps in Arizona and other states are planning to attend, so please take lots of pics and send us your story so we can blog it!