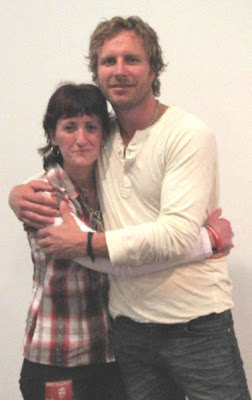 Aussie_Stace is well known for promoting Dierks Bentley in Australia--and online via FaceBook, Twitter, Myspace...you name it! She's even the Director for International Recruitment for DB Congress! So when she recently attended a concert with an all-Aussie artist line-up, Stacey didn't let that stop her from showing her support for American country artist, Dierks Bentley.

"I've seen Lee Kernaghan in concert about four times before, all on the North West Coast of Tasmania," shares Stacey on her Facebook page review of the evening. "Lee is a true Aussie legend (after Slim Dusty of course!) He sings about the land, the Aussie spirit, utes (short for Utility Vehicle for those not in the know)."

When getting ready for the show, she decided to wear her Dierks Bentley "Feel That Fire" T-shirt. "DB & LK are now best mates, after they recorded a song together on Lee's latest album," Stacey says, and she was hoping the shirt would make her stand out in the crowd.

During 'Boys From The Bush,' Lee wandered over to her side, looked straight at her as they both sang "We're life members of the outback club," but no Dierks nod. "A few other times, when I went to take photos, he'd look RIGHT at me...now if that doesn't cause camera shake, I don't know what will!" laughs Stacey.

Here's the rest of Stacey's story in her own words. Read all the way to the end for a real LK/DB treat! 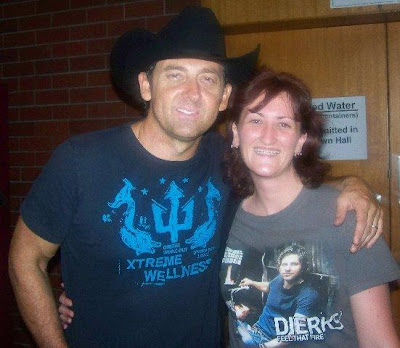 "When he sang 'Scars' (the song he recorded with Dierks), I was hoping and praying to myself that Dierks would miraculously walk out as a special guest. But Lee did a pretty good job on his own!"

"He was giving out t-shirts to some kids in the audience," she continues. "I thought to myself 'I have to get myself one of those shirts!' So during the encore, I went and stood in front of the stage. Lee took one look at me, at my DB T-shirt, pointed, grinned and pointed again. "It's Dierks!" he said, MID-SONG! He then winked at me *thud*, walked over to his drum kit, and grabbed the last T-shirt. He pointed at me again and handed me the T-shirt! Gotta love Stage-Lovies from an Aussie legend!

I was on bit of a high after that! But nothing prepared me for what was going to happen after the show.

Everyone was lined up to get autographs and photos taken. The last time Lee was in Burnie, he didn't come out to sign anything. So I just presumed people were waiting for Marcus, Jasmine and Tanya. But I almost fainted in shock when the line started screaming, and Lee walked out! Now I've been a fan of LK's for YEARS, but have never had the chance to meet him! Now was my chance!

While we were all waiting, Marcus came through the crowd to sign and get photos taken. Then Jasmine came along and signed stuff too. I told her that we'd talked before on Myspace. 'I see you're a Dierks fan!' she laughed. When she asked for my name and I told her, it suddenly dawned on her. 'Oh! You're Aussie Stace!'

Lee's tour manager was going down the line, asking everyone's names so that he could introduce us to Lee. The people behind me were talking about Adam [Brand](as you do at any country concert) and he piped up, 'Yeah, Brandy is currently on his way to Nashville now.' He pulled out his iPhone and said 'Yep. He boarded at 8pm.' I almost got all teary-eyed again.

The people in front of me were having trouble with their camera as they had their photos taken with Lee. Lee looked over at me and winked again *thud*

'If you like, I can have a chat with Stacey and then come back to you.'

I stared at him in shock. How the heck did he know my name?

He then told everyone:

"Stacey here was on my phone tonight..." he looked over at me. I must've looked like a stunned mullet. "You can't hide from me on Facebook and Twitter," he laughed, then said "Stacey is a BRANDette [Adam Brand fan]."

When it was finally my time to actually talk to him, I turned to his tour guy and said, "We don't need an introduction!" Lee laughed.

"I like your T-shirt!" he said. "Did you get that when he [Dierks] toured with Brooks and Dunn?"

I nodded. I meant to tell him that I had actually met Dierks in Melbourne, but as usual, that completely skipped my mind!

He told me how he'd met Dierks in Brisbane and they'd talked about maybe doing a duet together.

He'd actually replied to me on Twitter about it ;) But that was back when I was Aussie_Stace, so he probably didn't realise that was me. LOL.

I got him to sign my old tatty autograph book, that seems to be only filled with country star's autographs.

If I had've been thinking straight (I wasn't...cos I'd just had the shock of my life!), I totally would've asked for a photo on my phone!! ;) Next time!!

His new album Planet Country was the result of two years writing and producing and critics are saying it is his finest album to date. Recorded in Sydney and Nashville with what Lee describes as “some of the best musicians in the world”, Planet Country reveals enormous depth, masterful songwriting and maturity in Kernaghan that can only have come from experience. Standout singles include ‘Planet Country’, ‘People like Us’, the majestic ‘Love In The Time Of Drought’, ‘Dirt’, ‘Australian Boy’, ‘Gold’ and ‘Scars’ the southern rock inspired duet featuring U.S. country superstar Dierks Bentley.

Thanks for reading all the way to the end! Enjoy Lee and Dierks singing "Scars." This listen online version was provided by Nid, DB Congress rep in England (soon to be Virginia).
Posted by DB Congress at 7:00 PM