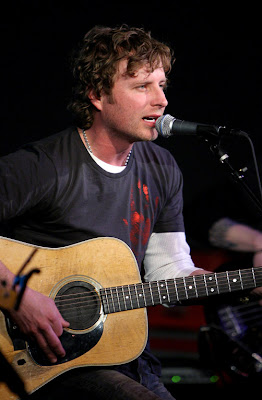 Nestled among Eminem, Taylor Swift, Jamey Johnson, and Robert Plant is our very own DB Congress president, Dierks Bentley, with his 'left turn' bluegrass project, "Up On the Ridge," earning a well-deserved spot on the MSN Best Albums of 2010 list!

Another year of music-biz turmoil has brought fresh bulletins from Chicken Little pondering the industry's shrinking fortunes and the Death of the Album in an age of downloads and a la carte songs. But judging from the sonic evidence, reports of the ... morefull-length's demise are premature, at the very least. Many of the artists on our honor roll are represented by new creative peaks, and the diversity of styles brings added reason for good cheer, as does the dominance by artists who've emerged in the new millennium. Here are 2010's most compelling albums as voted by MSN Music's editors and contributors.

Best Albums
Dierks Bentley – "Up on the Ridge" (Capitol Nashville)

One of this year's most satisfying left turns, Dierks Bentley's seventh album finds the charismatic singer chucking modern country convention to head into bluegrass territory. Teaming with a blue-chip cast of bluegrass and... more Americana aces, including Alison Krauss, the Punch Brothers, Julie and Buddy Miller, Kris Kristofferson, members of the Del McCoury Band, Jamey Johnson and Miranda Lambert, Bentley turns a side trip into a satisfying pilgrimage. Smart covers from Dylan and U2 (with Del McCoury himself harmonizing on "Pride (In the Name of Love)" to stunning effect) and well-chosen new material complete a set that's a timely reminder of bluegrass's timeless, high lonesome power. It's also a heartening testimony to the robust health of this homegrown style in the hands of younger musicians.
Posted by DB Congress at 11:45 PM