Since his launch of the Up On The Ridge bluegrass tour last month, Dierks Bentley has played many small venues and concert halls, showcasing songs from the upcoming album and "bluegrassing" up some of his classic hits. Some were skeptical about his departure from mainstream-type concerts, but the proof is in the sold-out shows and rockin' reviews!

Dierks Bentley's bold bluegrass move
May 8, 3:32 AM Manhattan Local Music Examiner Jim Bessman
Yet the humble Bentley, who also played acoustic guitar, proved himself a big-time star: Mainstream country artists who make the move to bluegrass usually do so well into the backside of their careers, when they have little or no chance left at commercial country radio. Dierks Bentley is so comfortable with his commercial success that he boldly goes bluegrass at the height of it. If this SRO house was any indication, he'll have no trouble at all taking his fan base along--and may bring out new fans who somehow missed out so far. 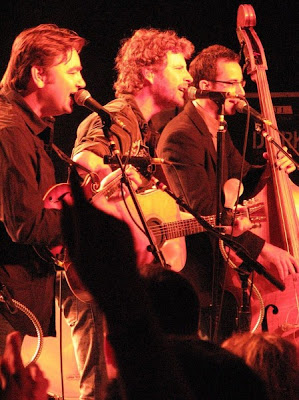 Dierks Bentley gets rootsy on South Street
May 13th, 2010, Author: Ryan Cormier, Categories: Music, Philly, TLA
Even though Bentley’s country originals connected with fans the best, the new songs from his forthcoming bluegrass album, “Up on the Ridge,” out June 8, were welcomed with open arms, including the somewhat spooky title track, the old time “Rovin’ Gambler” and the swinging “Fiddlin’ Around.” Not many modern country stars would stray from a successful formula, gambling a string of #1 albums for an album and tour dedicated to the much less popular genre of bluegrass. Perhaps that’s what he had in mind as he kicked off “East Bound and Down,” smiling wide while singing, “East bound and down, loaded up and truckin’. We’re gonna do what they say can’t be done.”

I'm very proud to be a die-hard Dierks fan, precisely because he always trys to push the envelope. That's what keeps him and his music fresh and exciting! Of course, that gravely voice could be singing the ABC's and I'd happily sing along!
Posted by DB Congress at 2:06 PM

Email ThisBlogThis!Share to TwitterShare to FacebookShare to Pinterest
Labels: concert review, Dierks Bentley, Up On The Ridge