UP ON THE RIDGE TOUR COMING TO AN END

This weekend will be the closing for Dierks' Up On The Ridge Tour. The last stops include: Charlotte, NC at Coyote Joe's on Friday night, and the historic Ryman Auditorium in Nashville on Saturday night. Coyote Joe's is a SOLD OUT show, and I've heard the Ryman is as well! 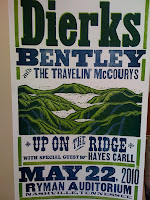 @TheRyman: How about a preview of the @dierksbentley Hatch for Saturday's show? http://twitpic.com/1p7iuk
Dierks mentioned on Twitter that there will be special guests, The Punch Brothers and Del McCoury, performing at the Ryman's show with him. Another added surprise, Saturday night's show will be a live taping, which will air on television at a later date. So everyone who is attending Saturday night should show those pearly whites because we might just see you in the audience when it appears on tv!
Posted by DB Congress at 11:53 PM