Dierks Bentley's hardworking nature earned Krystal Ebner an "A" for her Theories of Personalities class at Kennesaw State University, about 45 minutes outside of Atlanta. The Georgia DB Congress rep and psychology major tells us they had to pick a celebrity, choose a specific personality trait and write a paper on it. "So of course I did mine on Dierks and how he is such a hard worker. It's kind of researchy", admits Krystal," but once you get past that its pretty interesting." 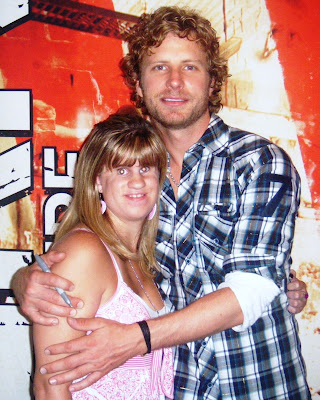 As many up and coming singers will tell you, it is very hard to break into and make it in today’s music industry. The few that do make it have a certain drive, a good sense of determination and have put many years of hard work into their careers which encourages them to keep going no matter what the set back. Country singer/song writer, Dierks Bentley is no stranger to this concept. A mixture of raw talent, hard work and a driven spirit has gotten Dierks Bentley to where he is today.

Dierks Bentley was born and raised in Phoenix Arizona (Jeffries, 2009). Although he had a happy childhood, Bentley was born into a nonmusical family (Jeffries, 2009). Therefore, Bentley’s musical interests did not appear right away. However, Bentley discovered his love of country music during his teenage years and at the age of nineteen he was Nashville bound (Jeffries, 2009). Bentley’s love for country music quickly surpassed interest; he began educating himself on the ins and outs of country music, making music a life style (Jeffries, 2009). When Dierks arrived in music city, the only thing on his mind was songwriting and singing (Jeffries 2009). Although he had these goals in mind, it did not take long for Dierks to realize that the music business requires a certain drive and persistence to break into. Through the entire stardom process Bentley ran into his share of discouragements and setbacks but always kept his goals in site (Jeffries, 2009).

After a couple years of hard work, Bentley’s career path quickly began to change (Jeffries, 2009). One night Bentley walked into a local Bluegrass bar called The Station Inn (Jeffries, 2009). He quickly became a regular and eventually got gigs of his own (Jeffries 2009). While Bentley’s night life was proving successful, his new day job allowed him access to country music history at its best (dierks.com, 2009). During the day Bentley worked in the tape department of the famous Nashville Network (dierks.com, 2009). Not only did these two major career factors give Bentley the recognition he needed but they also gave Bentley a boost of confidence to keep pushing forward. It was not long before Bentley was noticed by Capitol records executives who later signed him on to their record label (Jeffries, 2009). Being signed onto Capitol Records was the big break Bentley needed. Dierks Bentley currently has five studio albums and seven number one singles to his name (dierks.com, 2009).

One of Bentley’s key personality traits is his hard working nature which has gotten him to where he is today. Hard workers are usually characterized by being persistent and working diligently until everything is accomplished (dictionary.com 2010). According to Hard Work/Motivation article, “good job performance is relevant to the goals of the organization, it is in effect to the performance ability and motivation” (Klehe, 2007). This quote applies well to the work ethic artists must have to have a career in the music industry. Each individual artist must work hard in order to motivate themselves and keep up their performance ability to match the goals of the music industry.

One of the personality theorists that best describes the personality trait of hard working is Gordon Allport. In Allport’s theories he argues that people are consistent (Zuroff, 1986). Allport says that people may not be perfectly consistent due to different traits that are activated in certain environments or situations, but for the most part people do remain consistent throughout their life (Zuroff, 1986). For example, if someone is a hard worker early in their life, then most likely they will be a hard worker in the future. Another possibility according to Allport’s theory is if you are not a hard worker to start out with, a change of environment or a certain situation may cause an activation of a trait and may cause a person to change their work ethic.

For instance, for someone who may be involved in the music industry, the trait for hard work may already be present. The alternative would be a person who has poor work ethic may try to break into the music industry and because of the situation this trait may then be activated. For the most part Allport’s theories and studies were based on more of a scientific basis (Nicholson, 1998). Therefore, he believed that a person’s character was formed on more of a scientific scale or nature (Nicholson, 1998). So if a person is consistent, they are that way through nature, yes the environment may have affected them somewhat what, but for the most part they were born that way. For example, it is assumed that a person who works hard and puts forth the effort to succeed is instilled in them through nature.

Another theory that pertains to the hard working personality trait would be Carl Jung’s theory. Jung’s theories mainly dealt with knowing the self (Shor, 1994). His theory focuses on obtaining self-realization (Shor, 1994). When one obtains self-realization they are more consciously aware and the life is no longer present in the ego (Shor, 1994). For instance, when one figures out what they want out of their life, they feel they are more in control and can consciously handle the situation. Therefore, if a person realizes that pursuing a career in the music industry is the right path for their life, they have most likely realized who they are as a person and can consciously handle the situation and environment.

According to the article, Jung also states that everyone is different (Shor 1994). He explains that no two people are alike; we all have different personality types (Shor 1994). In Jung’s theory he explains that differences in people’s personalities are caused from: personality types, adjustment styles and motivation (Shor, 1994). Jung’s views on how these personality traits occur are due to heredity (Shor, 1994). Meaning that if someone is positively motivated it is because they were destined to be or born with that trait (Shor, 1994). This explanation also pertains to a person’s future in the music industry. If is more genetically motivated than another they will probably be more successful in any career field, especially the music industry.

Being genetically motivated would more than likely push a person to work harder, which would allow for greater achievement than those who are genetically built differently. Personality types and adjustment styles would also play a role in this situation. Having a good attitude in any career field is very important and being able to positively adjust to new surrounding is important as well, especially in the music industry.

Both of the previous theories have provided great explanations on how Dierks Bentley has achieved success. According to The Internal, External Control article, if a person is optimistic and strives for success and fails that certain tasks they will succeed on the tasks that follow (Weiss, 1973). This article sums up Dierks Bentley’s career. He worked hard to get into the music industry and at first he failed but eventually he succeeded. Both Allport and Jung argued that people’s personalities are constructed through heredity or nature. I think this concept is true for Dierks Bentley. He may not have been interested in music as a child but when his musical interests did appear he took it upon himself to musically educate himself. Therefore by nature, Bentley is hard working. He worked hard and put forth the effort to make a career for himself.

In Allport’s theory, personality is generally measured as consistent. This concept also proves true for Dierks Bentley. From the time he moved to Nashville up until today, He has consistently worked hard. Throughout the entire stardom process Bentley, was very determined and therefore worked harder to achieve his goals. Even though he has achieved some of his main goals, Bentley still consistently maintains his hard work ethic to keep his career going. Allport’s other trait concept also fits this situation. Dierks may not have been interested in country music until a certain situation activated a trait. This would explain why Bentley’s interest in country music did not appear until his late teens. In Jung’s theory he argues that there must be some sort of self-realization in order for a person to truly know themselves and what they want out of life. Dierks must have had this realization in his late teens. Once he figured out his love of country music he decided that the best decision for him was to move to Nashville and break into the music industry.

Jung also argued that everyone’s personality is constructed differently. This also may have had an effect on Dierks. Perhaps Dierks is more genetically motivated than some of the other artists in the industry and therefore has had more of a chance at success. Bentley could also be more open minded than other artists, making it easier for him to adjust to the new environment and situations associated with the music industry.

In conclusion, Dierks Bentley has worked hard for all of his success. Allport’s and Jung’s theories help support Bentley’s hard working nature. We are not sure which theory is the correct one for this situation but all of the explanations prove true in one way or another.
Posted by DB Congress at 5:35 PM