THE FINAL STOP FOR UOTR TOUR

As you may have known, Saturday night was the last tour stop for Dierks' "Up On The Ridge" Tour with The Travelin' McCoury's. It was also being taped for PBS and GAC, and will more than likely air in a few more months. As soon as they hit the stage, everyone was on their feet....clapping and cheering for Dierks, Tim, Steve, and the Travelin' McCoury's. They started off with "Train 45", then "Free and Easy", and that broke out into a great rendition of "Foggy Mountain Breakdown".

Dierks mentioned that his wife, Cass, was "somewhere out there" in the building watching, and that his mother had flown from Arizona to be there. He told us how he had the set list worked out just right, and his mother told him before the show that he needs to do #10. He showed us how his set list had been scribbled on to make changes and work the song in.

During his set, Dierks said:

"I never want this tour to end...so many amazing nights," says Bentley. "I'm not sure what memory I will hold closest...playing that first night in Portland, seeing New York City going absolutely nuts over bluegrass music or getting to play at the Ryman this weekend with some of my best friends and biggest musical influences. It has been a once-in-a-career type of tour!"

Other familiar hits with a bluegrass edge included: "Feel That Fire", "Lot of Leavin' Left To Do", "Settle For A Slowdown", "Sideways", "Come A Little Closer", "How Am I Doin' ", and "What Was I Thinkin' ". The fiddle, banjo, mandolin and the voices of the McCoury's didn't take away, yet added so much more to the many top hits. Several new songs from the upcoming album where performed, and "Up On The Ridge" was of course one of those.


Dierks brought out special guests, the Punch Brothers, to do a few songs with them. Now, you may be familiar with one member of the band, Chris Thile. Chris was a part of the group, Nickel Creek a few years ago. Dierks, Travelin' McCoury's, and the Punch Brothers did a Bob Dylan song "Senor", which is a cut included on the new album. Dierks even let the Punch Brothers do a couple of their own as he sat to the side watching and clapping along. 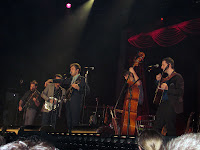 Then, Dierks sure enough brought out yet another special guest. It was none other than Del McCoury. You may recognize him from singing on track number 13, "Train Travelin' ", which is on Dierks' self titled album. No, they did not sing that. Although I did hear someone in the crowd shout that soon after Del was introduced. They sang "Pride (In The Name Of Love)", which was written by U2's Bono. They also sang another song, "Good Man Like Me", which is on the album, Modern Day Drifter.

Dierks joked around with Alan, upright bass player of Travelin' McCoury's, by saying that any one could play the upright bass, and Dierks plucked a few strings on it. Alan said something like, "Yes Dierks. You just proved to me that any one can play." Then, Dierks kind of challenged Alan to throw picks into the crowd. Dierks went first, and the guitar pick went to about 7th row area, but Alan's fell short to about 2nd row.

The show wrapped up with "How Am I Doin'" and Dierks mentioned something about exes and then moved into George Strait's "All My Exes Live In Texas". Dierks stopped singing for a couple of lines, and the whole auditorium kept on singing without missing a beat. "What Was I Thinkin' " and "East Bound And Down" were the final songs of the night. The Smokey and the Bandit movie theme song had everyone up on their feet clapping and singing along.

Via Twitter from Dierks: "thx nashville. magical night for all of us and hopefully you too. perfect way to end the RIDGE tour. will miss those @trvlnmccourys #fb"

A crowd of people fled to the stage and Dierks stayed and signed from the stage for a good 20 minutes signing tickets, posters, album covers, hats, etc. There were many DBC reps at the show and he recognized that way before the end of the night and thanked us for coming when he saw us. 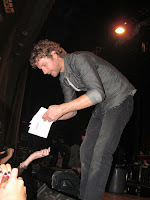 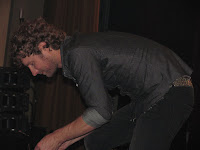 It was so great meeting so many familiar faces for the first time! See you all again very soon, and hope to meet many more reps at the LCB in a couple more weeks...I'm finally attending my first LCB and CMA Fest!! And I guarantee it's not the last either!

Speaking of LCB, be sure to keep an eye on your mail this week....my tickets just came in today!!!