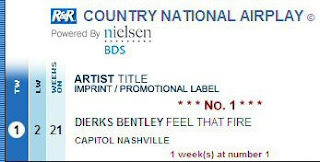 Guess what Congress...WE DID IT!

The charts collided this week for Dierks as his fourth studio album FEEL THAT FIRE topped Billboard's country albums chart, and the lead single and title track also landed in the number one spot on both country singles charts. The first week sales debut of over 71,000 units is also strong enough to wrangle the number three spot on the all genre Billboard Top 200 chart. This is Dierks' sixth number one hit. Music critics are praising Dierks for his consistent and engaging songwriting skills and FEEL THAT FIRE for its undeniable energy, garnering three stars from USA Today, while Billboard hailed the new project "exceptional." Check out all the critical acclaim at the news page on dierks.com!