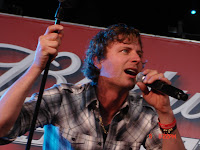 The latest review from CMT.com

Dierks Bentley’s album, Feel That Fire, and its title track both debuted at No. 1 last week on Billboard’s country charts. But every success story includes its own trials and tribulations. In an Associated Press interview, Bentley talks about finishing up that album and submitting it to Capitol Records president Mike Dungan — only to be told it was missing something. After so much hard work, that must be a difficult thing to hear and, on the flip side, a tough call to make. But sending Bentley back to the drawing board may have been the best thing for him because he came back with a handful of fresh songs, including his next single, “Sideways,” and infused some extra energy into Feel That Fire.

“Sideways” is a let-loose-on-the-weekend tune, complete with a strong beat, background hollers and singalong ability. I wouldn’t be surprised to hear “Worked all week, it’s time to play/Gonna get a little bit sideways” pumping out of the open doors of country bars all summer. It feels like Bentley was able to get back to what he was originally shooting for, and fans of songs like “What Was I Thinkin’” will surely find a place for it in their collection.

I think Bentley and Dungan did well to include “Sideways” on Feel That Fire. The pace and lyric fit right in with what I imagine when I think of the title of that album. And it’s fun, too. It’s interesting, though, (and maybe a little relieving) to realize that even experienced artists need a little help sometimes. I know I do often enough.

What are your thoughts? Please leave your comments below.
Posted by DB Congress at 8:17 PM