DIERKS REVS IT UP IN DAYTONA

How does country music and NASCAR go together? That was just one of the questions at the Question and Answer session with Dierks Bentley on February 7, 2009 at the Daytona International Speedway. According to Dierks Bentley, they're a natural fit. A lot of NASCAR fans also love country music. And many of the singers and drivers are good ole boys who have formed friendships and an appreciation for each others' talents over the years.

I am so glad I spent the extra money to get the Dierks Bentley Special Offer package. Not only did we get to experience the ARCA race and the Budweiser Shootout race, but the special VIP passes gave us front row access to the Q&A, the pre-race concert and the post race concert. 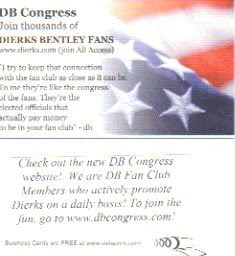 My husband and I enjoyed the practice prior to the ARCA race and the people sitting behind us in the grand stands were wondering who was performing, so my husband told them "Dierks Bentley", and the girl said, "ooooo I really like him!" So he reached in his bag and gaver her one of my dbcongress business cards and started talking about the website--I was shocked he beat me to it!

I met up with Cora and Renee while my husband enjoyed the ARCA race. We were the only one's in the Q&A tent for the longest time--we were front and center. We were getting worried nobody would show up, but about 5 minutes before D was to be there, we looked back and the whole tent was full! Yeah! I had made up some business cards with the fan club and dbcongress.com website on them and placed them in the empty chairs (the new visitors to this site the next day was higher than any other day!). People were asking questions like "Are you going to sing?" - People--there were signs all over the place pre-race show/post-race concert! 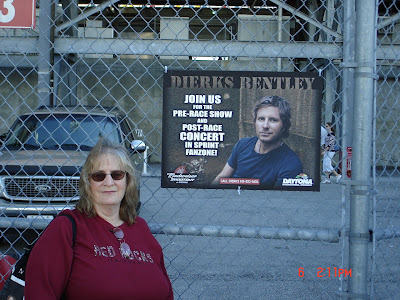 One guy stood up and said he was the Bud distributor truck driver and wanted to know when Dierks was going to crack open that can of Bud Light at his feet by his stool--so he did.
The local DJ who was interviewing Dierks said, these ladies in the front row came all the way from Tampa--and he points to me and says, yeah I see Ronna and a lot of my fan club in the front row there. I asked the question, "Tell us about the Wubba Nub Girl song in the liner notes of your new album" He started to answer but raised the beer up to his mouth thinking it was the mic and started to talk. Everybody laughed. He explained something about the pacifier I think and that he wrote a song about it for his daughter. I asked him to sing a few lines, he said "No, that's a song only for Evie!" Oh well, I tried! The DJ had said to me earlier, I bet you don't care about the cars, you're just here for Dierks and I said "you're right!" 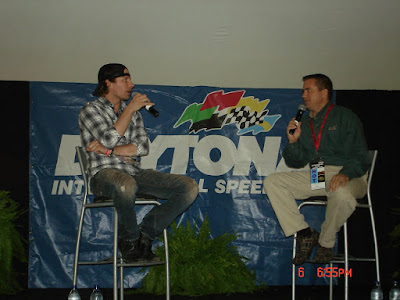 After the Q&A the ARCA race was just ending so we stood by the gate to go down on the track to the infield for the pre-race show. 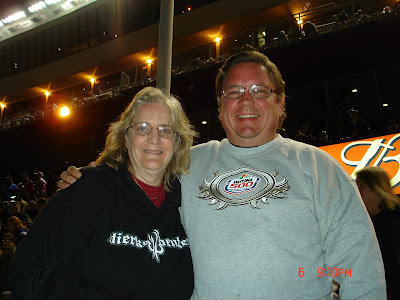 We were dead center, but the stage was pretty high. They backed us up about 2 feel, telling us the "fire" would be coming out of these contraptions all across the stage--which it never did. But when I saw the DVR later, it was cool they way they had Dierks singing Feel That Fire and introducing the drivers with fire surrounding them. What they did not show on TV was him singing Free and Easy and Life On The Run. They sounded great as always. The only issue was the tall guy to my left with his elbow nearly on my head the whole time --he was video taping all 3 songs. 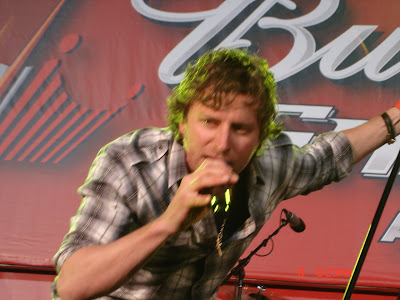 Click here for a YouTube version of the FOXTV broadcast of Feel That Fire/driver introductions.
Then we went back into the stands to watch the Bud Shootout--what an exciting 75 laps! And Dierks was given the honor to recite those most famous words in Motorsports..."Gentlemen, Start...Your...Engines!" and was named the Grand Marshall, riding around the track in the pace car.
Then back across the infield we trekked to the post-race concert. I was worried because they opened the gate late, and when we got down to the stage area, there was a sea of people everywhere! Although I was happy for D to have such a huge turnout, I had no hope of getting up front. So, we walked around the back of the crowd and lo and behold there was a VIP area up front that our ticket gave us access to! So we squeezed up to the rail on Robbie's side. They played 13 songs--revving up the fans from the start with Life On The Run--I love that song! They had the whole crowd screaming and loving it!
I asked Jay for the set list afterward. 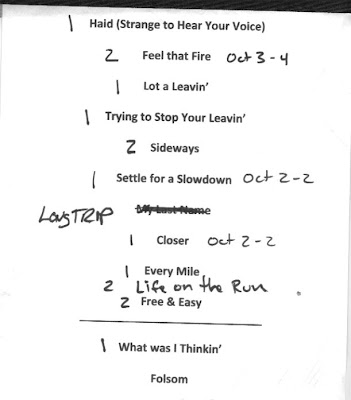 Even though it was in the 40's--good excuse to wear my DB hoodie--during the concerts it felt like 95--the whole FanZone was on fire! On our slow march to Parking Lot # 7 we were freezing but pumped up from a full day of great music, friends, and sport. It was a long day but so worth it to see Dierks three times in one day! 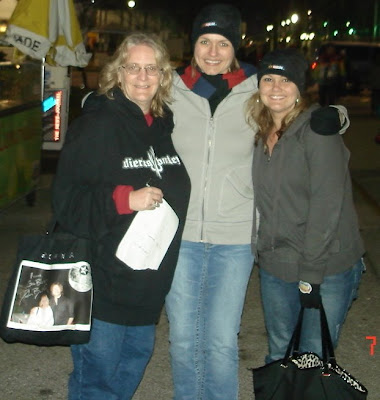