If you're watching (or listening to) ESPN2 right now, you may notice that in between the rounds of the Nationwide Series race at the Auto Club Speedway in Fontana, California, you hear the sounds of Dierks Bentley! Every time they cut to commercial, they play a 3 second Feel That Fire, Sideways, Life On The Run, or believe it or not, Better Believer! All new songs from his Feel That Fire album, released 2/3/09. 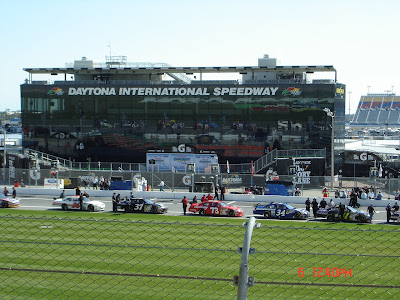 Curiosity got the better of me, so I googled ESPN, Motorsports, and I searched for "dierks." Here (in part) is what I found:

DAYTONA BEACH, Fla. -- A few sights and sounds from the Sprint Cup garage after a crazy night at Daytona International Speedway:

There's Tony Stewart talking to Hendrick Motorsports management about the engines they supply him at Stewart-Haas Racing, the ones that helped the two-time Cup champion to a third-place finish in the Budweiser Shootout.

There's team owner Jack Roush walking past the NASCAR hauler, probably wondering whether there's something he could question officials about on the finish that saw McMurray's attempt to block Harvick fail.

And, ESPN.com blogger Marty Smith added a side note after his "A big Daytona Letdown?" blog: Song of the week: "Better Believer," Dierks Bentley. I feel like that a lot. Listen to it, you'll understand.

With all this dierksness in NASCAR, can't you just see Dierks singing, "...gonna 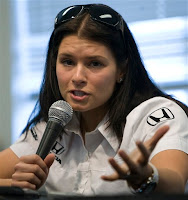 get a little bit sideways" with NASCAR cars sliding sideways in the foreground, and Danica Patrick, with her long, dark hair (like all the leading ladies in DB's videos), "...I can see you came to rock in your blue jeans and white tank top...", (I know, I know, she's an IRL driver, but it could happen!). Sounds like a video in the making for Dierks' new single, Sideways, doesn't it?