Most Dierks Bentley fans are happy just to listen to his music. Others have a strong bond to each emotional lyric, vocal bravado and personal connection with Dierks’ charisma. So much so, that everything from db logos to lyrics, on ankles and backs, dedicated Dierks fans and DB Congress reps have him “inked” into their skin in the form of “all things dierks” tattoos.

According to DB Congress rep, Rachel, from Florida, “Its more than just Dierks…I’ve made a lot of friends…that’s why I got a Dierks Bentley tattoo--music notes that stand for Every Mile A Memory…” Listen to Rachel’s story here as she shows off her tattoo, and hear Dierks’ response:

“Man, that’s just the ultimate form of gratitude…people really incorporate my songs into the fabric of their lives…you wanna make sure you always make them proud to have gotten that tattoo.” (Dierks) 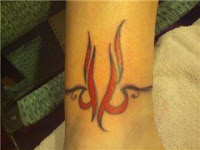 Nebraska DBC rep, Sarah, says, “A buddy of mine had a friend in town who does tattoos so I got it at my friends house in May of 2008. I'm such a huge Dierks fan. I love his music and everything he stands for. No matter how big he gets he always is loyal to his fans by keeping his meet and greets down so he can actually spend time with each fan--unlike some other groups that just make it seem like you’re being herded through like cattle. And even though I haven't had the chance to actually meet Dierks, I hope one day to get him to autograph my tattoo and have his signature tattooed on with it. It just wraps around my right ankle and connects so it looks kinda like an ankle bracelet.”

A thankful Erin (DBC Florida rep), explains: “I got this tattoo because Dierks and his music helped to pull me through the hardest time in my life. Not only that, but I have met some of my very best friends because of him. No matter what happens, I will always be grateful to him for that!" 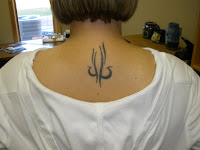 Kim (DBC rep, MO) was struggling with a lot of decisions. She decided to get a Dierks tattoo “because he was the first artist who touched my heart through his music, and he helped me through some tough times. Listening to his music I felt I could tackle any situation--it's very inspiring. His music has brought me together with some of the greatest friends a person can have!” 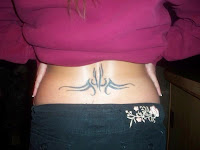 "The reason I got the Tattoo was because it represents my loyalty to Dierks. His songs have gotten me through the darkest days of my life and I couldn't be more thankful for his music! He also has the name (Dierks) of my ex's last name who was killed in a car accident! I thought it was a perfect time to get both men that mean the most to me in one tattoo. So Dierks is stuck on me until I die! I wouldn't have it any other way. I got the tat on my birthday 2-5-08. I wouldn't change a thing about it! Dierks knows me as Samantha (DBC rep from Wisconsin) with the tattoo!" 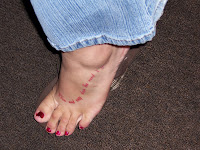 Keesha, was so moved by the "Free and Easy Down The Road I Go" lyric, that she had it inked into her instep. Dierks himself had to see it a little closer.

Cassandra,(DBC rep, CA) and Hannah, (Ohio DBC rep) both got tats for Dierks, too! (Awaiting photos). How many other DB Congress reps have committed to permanently promote and pay homage to Dierks? Leave your comments below!
Posted by DB Congress at 8:29 PM

Email ThisBlogThis!Share to TwitterShare to FacebookShare to Pinterest
Labels: DB Congress, Dierks Bentley, Dierks fans, Every Mile A Memory, Free And Easy Down The Road I Go, promote, tattoos