BECKY PASSES BENTLEY THE 'B' CUP

Becky is one of only three Dierks Bentley Congress reps in the small state of Delaware, but she has a big heart when it comes to supporting our president (DB)!

"I believe the first song of his that really, really got my attention is "What Was I Thinkin.'" Maybe because my name is Becky (lyrics "Becky was a beauty..."). I love his voice, love the style of his music, and have been to see him three times now. Going to Dierks concerts bring me happiness, joy and just plain good ole fashioned fun. I lose all the stress in my life for [those] few hours and become the me I want to be--free to express myself."

One such concert was on May 12, 2010 at The Theater Of The Living Arts in Philidelphia, Pa. "It was an Up On The Ridge tour perfomance and the music was so great," says Becky. "Not enough words to describe--I was in awe!" "I gave him my "B" coffee cup at my Meet & Greet. I told him I used that cup every morning to relax with my coffee and paper. He seemed surprised that I would want him to have it, but I told him I would love the idea of him making memories with it now. He thanked me so much. What a great guy he is!" 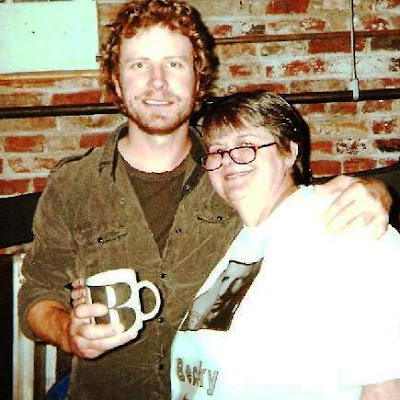 Just seven weeks later, Dierks reached out and held Becky's hand at his House of Blues concert in Atlantic City, NJ on July 5, 2010. 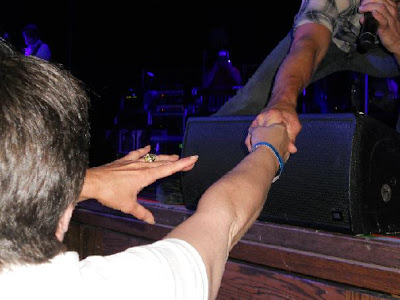 "I had given him a gift for his wife during the meet and greet before the show. I have an online shop, www.beckysrosecottage.com, so I picked out a beautiful vintage rose china clock for Cass. He really appreciated that I would think of his wife. I told him I wanted to thank her for lending out her husband for our entertainment. It cannot be easy for her when he is away so much. I just hope she likes the clock I made for her.

I also told Dierks during the meet and greet that Pride needs to be a single. I have requested it several times but he needs to release it first. He seemed surprised that I was calling radio stations for his songs. Does he not know we take our jobs as his reps seriously?

At the end of the concert he also gave me the play list. I was surprised. It was a little tattered when he took it down, but I still got a kick out of receiving it. Although Senor is not on the list, someone in the audience yelled it out and he sang like one verse of it and was surprised we all knew it because we sang along with him. I think he got a really big kick out of that. 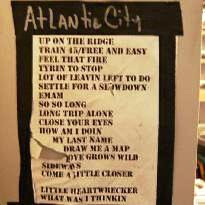 The concert was great. It was one fun night I know that. I had a blast! He really is a very nice, down to earth person who just happens to be a great artist, too."

P.S. I just love the way he signs 'God Bless' on his autographs, too!

Thanks for sharing, Becky!
Posted by DB Congress at 3:21 PM

Email ThisBlogThis!Share to TwitterShare to FacebookShare to Pinterest
Labels: Atlantic City, Becky, DB Congress, Delware, Dierks Bentley, House of Blues, Meet and Greet, The Theater Of The Living Arts, Up On The Ridge