We're thrilled to introduce new Delaware DBC rep, Amy Shepheard! I asked Amy if she would be willing to be our rep of the week and she replied: "How fun! I would love to be featured!" Enjoy the Q&A!

Where and when was this Meet and Greet pic taken?
House of Blues in Atlantic City, NJ July 2, 2010 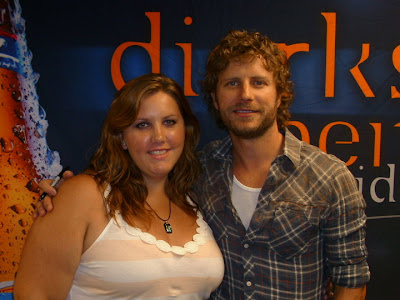 How/why did you become a Dierks fan, and fan club member?
My co-worker and I are lone country fans where we work. She has been a Dierks fan all along and invited me to a show at the Delaware state fair in 2009. I had always liked Dierks when I heard him on the radio, but didn't know anything about him or own any of his albums.

He was playing the fair with Brad Paisley, so I figured if Dierks wasn't any good, there was still Brad, right? WRONG. Dierks was amazing at that show!

I am an avid concert-goer, and his was the best I had ever seen... he totally stole the show! I was completely blown away and downloaded every piece of Dierks music I could find as soon as I got home. This year, I stumbled on Dierks's Up on the Ridge tour in Philadelphia at the last minute, not knowing what to expect from the bluegrass. I fell completely in love with him and the music, joined the fan club, pre-ordered the new album, and bought tickets to see him again a month later in Atlantic City!! I can't wait to see him again!

What do you do daily/weekly to promote Dierks in Delaware?
My friend at work and I are a team of Dierks promoters. We have others at work (hip-hop fans nonetheless) listening to him during our shifts! The local stations are slacking when it comes to the new single, so I try to request UOTR as often as I can.

What's your fav DB song/album and what does it mean to you?
As I tell everyone, I play all of his albums on shuffle, and there's not a single song I would skip. I love so many of them. My favorite tune is "Free and Easy" because I have adopted the theme as my life motto... I have been stressed out in the past, but I now realize that Dierks is right... if you only get to go around one time, I'm gonna sit back and try to enjoy the ride! That song makes me smile :-)

Welcome to the DB family, Amy, and thanks for being our fourth DE rep!
Posted by DB Congress at 10:25 PM