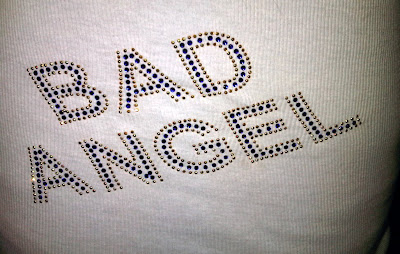 "When Dierks Bentley's recent tour schedule was announced I quickly noticed that there were no Oklahoma dates listed, so I looked for shows in surrounding states and found the Winfield, Kansas show. Knowing it would be a 2.5 hour drive and a really hot day, I knew it may be difficult to find a wing-woman for the show....but have no fear....Lori Hillhouse (whom I met after a DB show in February at Winstar Casino in Thackerville, OK) loves traveling and supporting music that she loves, so we paired up, got our tickets, were both lucky enough to win Meet and Greets....soooo...off we went!

We arrived at the venue at about 6pm and were given the run-around about where we could pick up our meet and greet passes (recommend arriving early), but finally about 30-45 minutes later we found them.....only to find out the meet and greet had been delayed an hour, due to the heat. It was an outdoor venue and people and entertainers were dropping like flies, so they moved the performers back an hour to allow for the sun to set behind the grandstands....so, we grabbed a drink and found some shade!

At 8:15pm, we met up with Brittany and only 4 other fan-clubbers and made our way back to see Dierks.

As we got backstage, Dierks was coming out of a trailer where they had 3 guitars set up for him to sign. 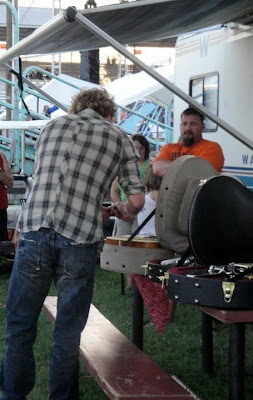 After signing the guitars, we each got to talk to him and have a picture taken. He commented on our custom made white tank tops that said "Dierks" on the front and "Bad Angel" on the back. He told me that they had actually played Bad Angel on Friday night with Jamie Johnson, but that it was hard to do with no female vocalist. I think he thought we would be disappointed that he wasn't going to sing it, but honestly, I didn't think he had been doing it "live" anyways, so it was no big deal. 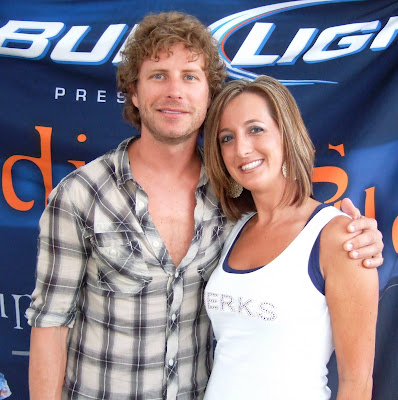 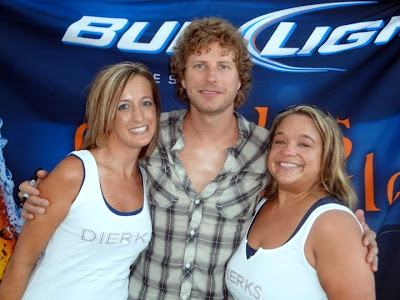 He did say that they would play Draw Me a Map. I gave him a picture to sign and he immediately wanted to know where it was taken, he had remembered meeting me a couple times previously. Since there was only a few people from the fan club with meet and greets Lori and I got to steal another picture and chat with him a little while longer before it was time to go.

So, off we went to the madness in front of the stage...don't ask me how, but we managed to squeeze our way up to the "cat walk" part of the stage and enjoyed the show.

He started with Up on The Ridge, and then sang most of his hits, such as, Free and Easy, Feel That Fire, I Wanna Make You Close Your Eyes, Come a Little Closer, My Last Name, Little Heart Wrecker, Every Mile a Memory, Long Trip Alone, Lot of Leavin' Left to Do, All My Ex's Live in Texas (George Straight), Draw Me a Map, then did an encore with Sideways, and What Was I Thinking. He played a good 90 minutes and sounded absolutely phenomenal....probably the best I've heard him! All in all...another great DRT, and definitely worth the drive and the heat!" 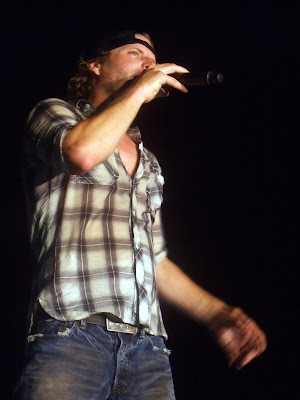 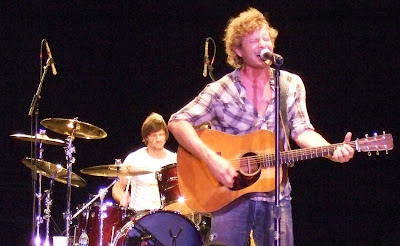 All my pics can be viewed at:
http://picasaweb.google.com/Karissa1977/DierksBentleyConcert02#