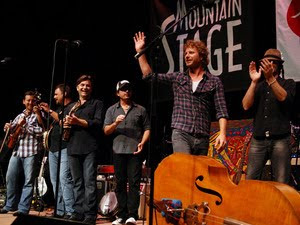 Country star Dierks Bentley first discovered bluegrass music as a teenager at Nashville's Station Inn. There, he met Rob and Ronnie McCoury and fiddler Jason Carter — all of the Del McCoury Band — and fell in love with the style of music. Now, after many hit songs and millions of records sold, Bentley makes his third appearance on Mountain Stage with songs from his bluegrass-flavored album Up on the Ridge.

Here, Bentley brings along The Travelin' McCourys — Ronnie McCoury on mandolin, Rob McCoury on banjo, Jason Carter on fiddle and Alan Bartram on bass — who also helped record Bentley's new album, Up on the Ridge. They're joined by drummer Steve Mismore and Tim Sargeant on steel guitar; both are members of Bentley's regular touring band. The band gets to stretch out in the bluegrass standard "Rovin' Gambler" before Bentley sings the touching "Down in the Mine."

Listen to the 32 minute show here.