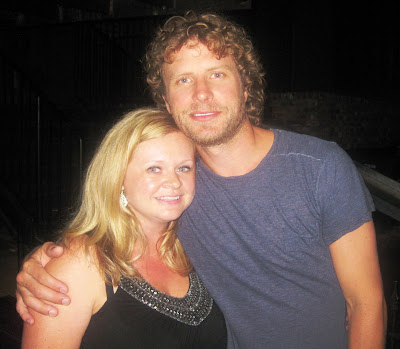 We told you about Dierks Bentley Congress rep, Michele from Maryland who learned from a tweet from Dierks last October that he was taking a train from NYC to Baltimore, so she took a chance and drove to the train station to see if she could get a picture taken with him. Ten months later, Michele tried her luck again. Here's what she had to say:

"So I hadn’t seen Dierks in two months so it was time to strike again in Charlottesville on 7/15. His show was amazing as usual, maybe even better than the last two I saw this summer. Here is a picture of us after the show. He always surprises me when he remembers me. I can’t imagine how many fans he meets a week. Dierks is so great with us and remembers his fans so easily."

I have to agree, Michele. He has the best memory!
Posted by DB Congress at 9:18 PM