DIERKS BACKSTAGE INTERVIEW AT JAMBOREE IN THE HILLS

Dierks Bentley gives a back stage interview at Jamboree in the Hills in Ohio yesterday. That must have been some special gum he was chewing--and what talent to talk and chew gum at the same time. Watch as Dierks talks about the first time he performed Jamboree compared to now, his new Up On The Ridge CD, and who he was hoping to bring up on stage with him. Watch the video here. Photo credit (above): Jason L Nelson/AdMedia

Dierks posted this pic on Facebook and Twitter with the following caption: "hey brian and cassady...zz top called...they want their move back" 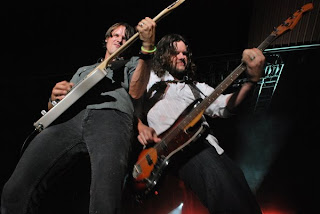