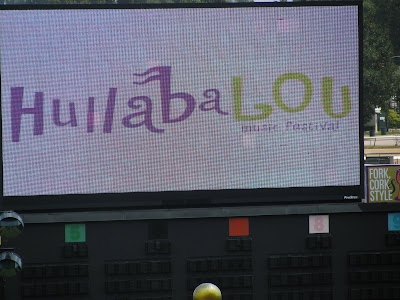 This is my first official blog, so here goes!

The inaugural HullabaLOU in Louisville, KY! My husband, Lloyd, and I got there in the afternoon, I got my M&G credentials, and then we hung out in the A/C! It was HOT! There were screens in there of the 5 stages. Going to the M&G, we ran into David and Heather. They had been there since about 10:30, and had already been on a backstage tour that Heather won! The M&G went fast. There were lots of radio people there. As I stepped up, Dierks said wow, there are some long time fans here! I gave Dierks 2 bones for Jake and George from the Three Dog Bakery with their names on them! I told him congratulations, and he kind of looked at me (I guess there are lots of thing to congratulate him on!), and I said on the new baby, and he said Thanks! It was hot and loud, with the music in the background from all the music stages. 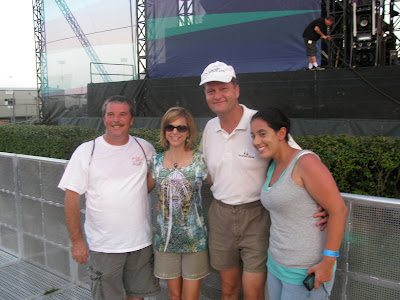 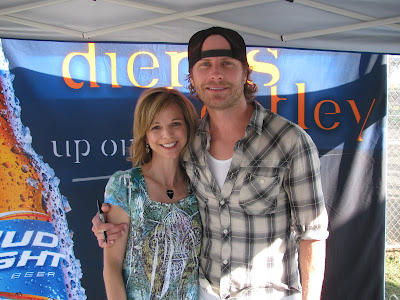 Well, Lloyd and I then went to see The Travelin' McCourys with Dan Tyminski (sp?). We got right next to the stage. They were great! Lloyd said to me that he forgot how fun they were! They asked the crowd who else we were going to see, and we yelled out "Dierks Bentley!", and Alan (upright bassist) grinned, and said "Yeah, we kind of like him! We just did a tour with him." And we said, "Really, we had NO idea!" lol No, we told them that we had seen them at the Ryman! Unfortunately, their set overlapped with Dierks. 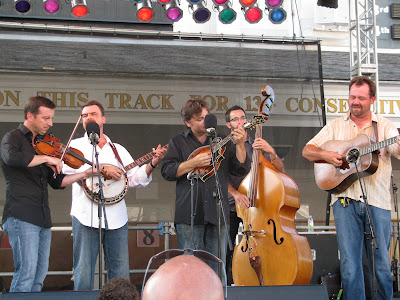 So, we go see Dierks (who they had start early! Boo!) Anyway, we had decent seats, but we were able to move closer for Dierks, since some people hadn't arrived yet. Well, those that missed Dierks, all I can say is "Your loss!" He was GREAT, as usual, running and sweating on that big stage. He brought Sam Bush out with him at one point, and they were awesome!! They did Fallin' For You!!! I hadn't seen that one live! 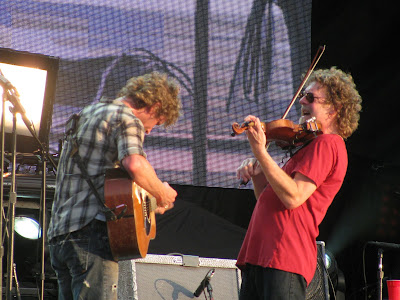 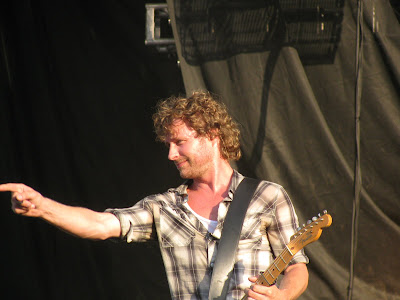 Then, Bon Jovi came out (15 minutes early! What??). Anyway, I hadn't seen them before, and all I can say is they are AWESOME!! I've been a fan since the big-haired 80s, and wow, these guys put on quite the show! And Jon Bon Jovi is adorable and in great shape, too! They had the crowd going! Then, time for the encore, and we were thinking that they hadn't done Wanted Dead Or Alive yet. So they come back out, and start up that song. And then, Dierks comes out to sing it with them! That was such a treat that took a terrific night and just pushed it right over the edge!!! They sounded great together (future Crossroads?)! 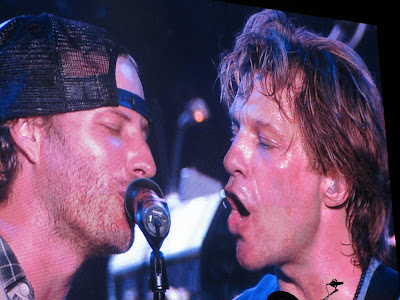 It was a heck of a day and night of music. I think Louisville did a pretty good job with the first HullabaLOU. Hopefully, there will be one next year and Dierks'll come back!

Thanks, Lee Ann, for sharing your memories!
Posted by DB Congress at 6:59 PM