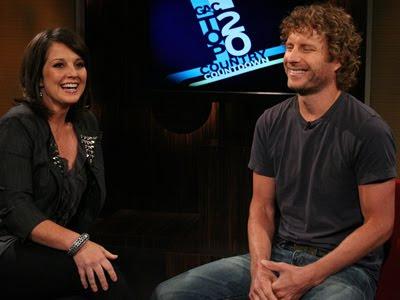 Nan Kelley interviewed Dierks Bentley on the GAC Top 20 Video Countdown this week, and she made no secret of how much she loved his new album, Up On The Ridge. They talked about how the album came about and how Dierks called each of the featured artists on their cell phones (Miranda & Jamey) to ask them to sing on the record. She talked about how Pride blew her away, and Dierks gave Del McCoury and Chris Thile/Punch Brothers lots of credit.

Dierks talked about his daughter, Evie loving the album, too, and always asking for "da da's" record to be played. Dierks said if she was old enough to buy records the album might be platinum by now.

He also said he likes listening to the record not to hear himself sing, but to hear all the wonderful instruments and artists who make up the whole body of work.

Dierks was beaming ear to ear and Nan was flat out gushing! She said she would love to hear "Draw Me A Map" as a single on the radio (us, too!). Dierks admitted it could happen, that he's gotten a lot of great feedback on that song, with Alison Krauss singing harmony vocals. "Draw me a map, that leads me straight to you - woo hoo!" Nan said excitedly.

Dierks joked he might have to put Nan in charge of radio promotion to get the song played. She joked, "This is Jenny from Ohio" pretending to call a radio DJ. Dierks looked right in the camera and said, "OK, Jenny in Ohio, you gotta call radio now."

Noticeably present on Dierks left hand was his wedding band, which he doesn't usually wear. It was good to see! Guess he's visibly 'fessin' his love for wife Cassidy.

Conspicuously missing was the Up On The Ridge video from the top 20 countdown. So, we need your help, congrass! Vote daily, please! Give it all you've got to give!
Posted by DB Congress at 7:56 PM

Email ThisBlogThis!Share to TwitterShare to FacebookShare to Pinterest
Labels: Dierks Bentley, GAC Top 20, Nan Kelley, Up On The Ridge CD