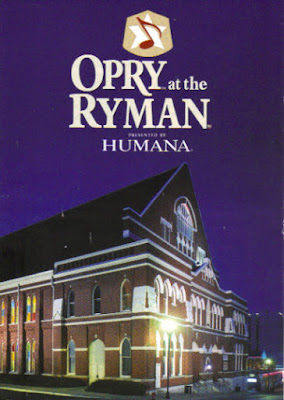 Dierks Bentley is set to perform the Tuesday night Opry tonight, July 20, 2010 in The Ryman Auditorium, Nashville, Tennessee! If you can't be there in person, you can listen online at wsmonline.com.

But wait, there's more! Dierks fans will be chatting online at dierksfans.com (click on "chat room") while we listen on WSM! It all begins at 7:00 pm central (8:00 pm eastern).

Dierks is the feature story on the home page of The Grand Ole Opry's website:

Dierks Bentley surveys the view from UP ON THE RIDGE
Seven summers ago, Dierks Bentley hit the country music airwaves with his debut hit "What Was I Thinkin'," and did for sales of little white tank tops what Catherine Bach did some twenty-plus years earlier for short-short cut-off jeans. This summer, the Opry star has made what the Washington Post called "a supremely gutsy move" and beaten a new path with a rootsy new record, UP ON THE RIDGE. Turns out the view from up on the ridge is a good one for Bentley, with the project generating critical acclaim and a hit title track single, not to mention personal fulfillment. Opry.com caught up with Bentley the day before his July 20 Opry appearance for more on the record and his musical journey since that little white tank top summer of 2003.

This album, of course, has a different sound. Did you do anything different in preparing to record it?

Pretty much everything about writing and recording this album was different. It's something I've been thinking about for a long time...but even so it took a lot of great twists and turns that I wasn't expecting.

Tell us about the first time you remember hearing the kind of music that inspired UP ON THE RIDGE.

I walked into the Station Inn (world famous bluegrass bar) when I was 19 and it changed my life, literally. I felt like I had found the true source of authentic real country music...other than the Opry, of course!

If you had to describe the work of Jon Randall as producer in just a couple of words, what would you say?

You're most certainly introducing some mainstream country fans to the music of artists like Sam Bush, who appears on the record and has made a number of recent TV appearances with you. But have you found that some of the fans of the kind of music they do have also recently discovered you and your work?

It's been great hearing "Up On The Ridge" on country radio and knowing that millions of country fans are listening to Sam Bush on slide mandolin! That makes Jon Randall and me really proud. My friendship with the Del McCoury Band, The Grascals and lots of other folks in bluegrass music has led to opportunities to get in front of their fans, but certainly this record has really facilitated that a lot more.

If you could have dinner with any of the artists covered in songs on UP ON THE RIDGE, who would it be?

We covered a U2 song on this album, those guys have worked with Cowboy Jack Clement on their RATTLE AND HUM album, they've recorded with Johnny Cash and they have spent time in the Station Inn! There would be some great conversation over a couple pint glasses.

Is there another instrument you'd like to learn to play?

I took some mandolin lessons from the late Butch Baldasarri. I was 24 and I remember thinking "by the time I'm any good at this ill be in my late 20's." I quit. Wish I hadn't.

Chris Thile and his new band The Punch Brothers I think were originally called "The Tensions Mountain Boys"... say that a couple times fast and you'll get it. Tough to beat that!


Tell us about the last night of the UP ON THE RIDGE TOUR at the Ryman Auditorium. How did it feel to sell out Nashville's most beloved venue?

It was a career highlight on so many different levels. I still remember going to an Opry show at the Ryman for the first time... I also remember going to many, many Bluegrass Nights that were held there. It's the Mother Church of Country Music...and to have sold it out during our Up On The Ridge Tour...to end the tour there...all of these factors made it just the night of a lifetime for me.


After playing this style of music on the record and in shows all spring, do you still like to just go hang and watch it being performed at a place like the "Station Inn"?

A perfect Tuesday night in Nashville for me is to be able to play the Opry and then head over to the Station Inn and be a fan and sit in the back and listen.

Hanging out backstage at the Opry, it seems like some of the best stories and biggest characters come from the world of bluegrass. Who are some of the "characters" you have most enjoyed meeting?

As Pete Fisher can attest to, I enjoyed hanging out backstage at the Opry house a little too much...he limited my backstage access for a little while! But, that was back before I had a record deal and obviously before I got the ultimate backstage pass: Grand Ole Opry membership!

Backstage is the best...overhearing a joke from the late Porter Wagoner, talking to Eddie Stubbs side-stage, having someone like Jim Ed Brown pass along some kind words of wisdom or seeing the newest acts walk out and play for the first time...it's always a good night.

President Obama quoted you last summer, saying country music is "the best shrink $15 can buy." Do you have an equally quotable definition for bluegrass?

Ha! What's an Opry ticket going for these days? I'd say that's the best shrink any fan of country music can buy. If that doesn't work, head over to Lower Broadway and try Roberts and an old Bud Light...works for me.

You're hosting a show called "The Thread" each week on 650 WSM and wsmonline.com. What's the best part of that gig?

Knowing my voice is broadcasting on 650 AM WSM! That station and its history means a lot to me.

...The most challenging part?

I have a great producer, Shannon McCombs. She makes it easy.

So does it feel like seven years since you spent the summer watching "What Was I Thinkin'?" climb to the top of the charts?

It doesn't. I've never gotten tired of singing that song, still look forward to it every night.

It never gets old, to be honest. It means a little more with every visit to the Opry. Not sure why that is (and it's the same thing with the nervousness), the Opry is the one stage that you never lose that little bit of pre-show nerves.
Posted by DB Congress at 7:36 PM